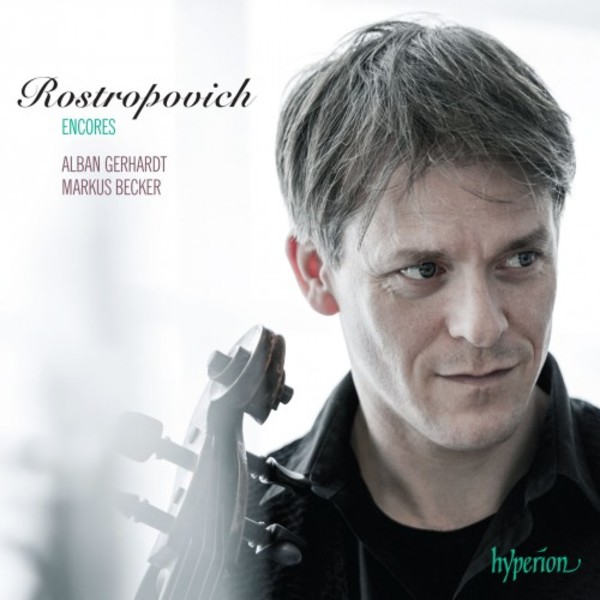 For the young Alban Gerhardt, Rostropovich was a reason to become passionate about the cello: in the notes accompanying this release he recalls being blown away on first hearing Slava play live in Berlin. This splendid follow-up to Casals Encores sees Gerhardt paying homage to his great predecessor with an eclectic programme of shorter works, including two by Rostropovich himself.

Alban Gerhardts is an especially apt homage, showcasing the Russian masters commitment to expanding his instruments repertoire and popularity, at the same time as celebrating his sense of fun. ... Amid miniatures by Scriabin, Stravinsky, Popper and Ravel, there are Rostropovichs own arrangements, including a riotous March by Prokofiev and a slidy, twangy version of Debussys Minstrels. The disc is bookended by two rare pieces by Rostropovich himself, a scurrying Humoresque and an intricate Moderato for cello alone.  Erica Jeal
The Guardian 16 February 2017

While Gerhardts disc of Casals encores glowed with old-fashioned refinement, this collection comes with an icy vodka shot of Prokofiev and Stravinsky: fabulous, high-kicking arrangements from his mentors Cinderella ... and a march from The Love of Three Oranges that blazes with impertinence.  Helen Wallace (Chamber Choice)
BBC Music Magazine February 2017

... to explore the tracks on this recording is to explore Rostropovich himself, and Gerhardts performances themselves approach this mission in different ways. Take the Humoresque, which, while every bit as direct and vital as on Rostropovichs recordings, sees Gerhardt mostly eschew Rostropovichs own deliberate roughness in favour of an equally grabbing fluttering, puck-like finesse.  Charlotte Gardner
Gramophone January 2017