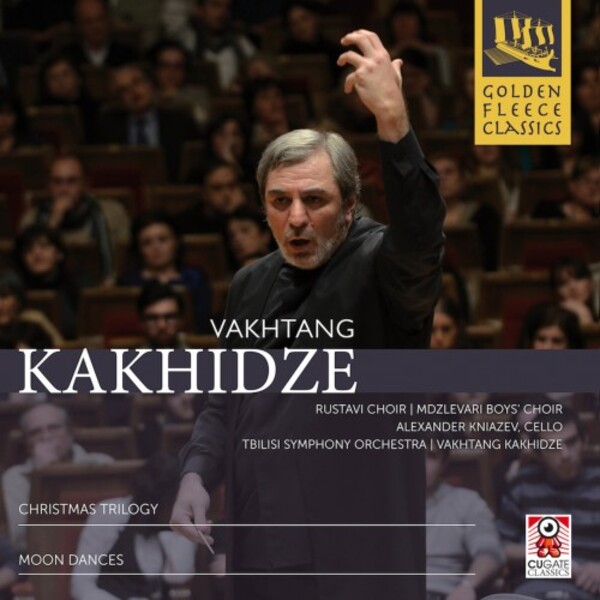 In 2000 Vakhtang Kakhidze, son of the legendary Georgian conductor Djansug Kakhidze and multi-talented as composer, conductor and pianist, received a request from Switzerland to compose a musical praise on the occasion of the bimillenary of the birth of Jesus Christ. It came from the famous Swiss Army Brass Band, which needed something special for a tour across their country. So they actually commissioned the composer and in the same year Vakhtang Kakhidze accomplished Glory Alleluia, Elegy and Advent Suite for mens and boys choirs and brass band.

In 2003 he created a new version of these pieces for large symphony orchestra. It brought another intensity to the colour of sound, but he still kept the emphasis on the brass section sonority, which maintains and even enhances the solemnity of the whole musical layout. And eventually, as the three pieces are united by one entire idea, the composer now decided to give them a common name: Christmas Trilogy. And indeed the number 3 turns out to be more than just a digit  it is a kind of interface for the three movements as well as for the three living languages (Georgian, Russian and German), which are used in the lyrics, moreover for the three music groups, which perform the cycle, for the three vocal traditions in Christian liturgical singing and last but not least for the Trinity, which the whole Trilogy is basically about.

Moon Dances was commissioned by the famous French cellist Emilia Baranovska and was written in 1994. The same year the premier took place in Paris. Legendary Georgian composer Giya Kancheli was a great admirer of this suite. He described Vakhtang Kakhidzes vector of thinking as singing, which he found perfectly well accomplished within this composition and concluded: In small musical forms  multi-movement suites, genre of musical miniature, songs  the so called singing origin turns into blessing. I would particularly like to emphasize that imperceptible state of spirit which we can so rarely feel on recordings (in contrast with live-performances). Moon Dances for cello and chamber orchestra is recorded tremendously. (...) Right here I feel that rarely achievable live breath which I already mentioned before.