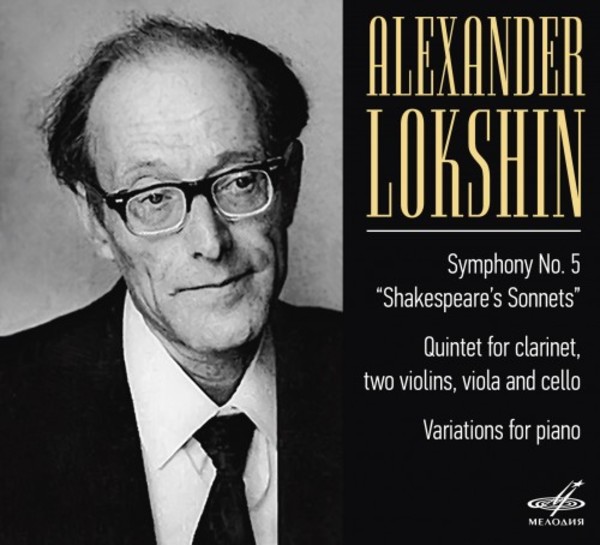 Alexander Lazarevich Lokshin (1920-1987) was one of the most original representatives of the Russian school of the 20th century and unfortunately underrated in his lifetime. A pupil of Nikolai Myaskovsky and a friend of Dmitri Shostakovich, who admired his music, Lokshin was a creator of his individual style with an organic blend of symphonic, chamber and vocal genres.

His two-movement Symphony No.5 (1969) is the composers characteristic type of symphony with voice written for baritone and chamber orchestra and based on Shakespeares Sonnets 66 and 73 (translated into Russian by Boris Pasternak). The Quintet for clarinet and strings (1955) also has two parts: a slow one, where, according to the composer, Shostakovich and Vertinsky were combined in a very paradoxical way, is followed by variations inspired by Stravinskys style. The two large cycles are supplemented with an earlier piece, Variations for Piano (1953), written in the vein of Shostakovich and dedicated to Maria Grinberg, an outstanding Soviet pianist and successor of Felix Blumenfelds school.

Alexander Lokshins works are performed by some of the most prominent Russian musicians of the last century: Symphony No.5 is performed by Rudolf Barshai, a friend and admirer of the composer, and creator of the first Soviet chamber orchestra, and Yan Kratov, a soloist of the Moscow Stanislavsky and Nemirovich-Danchenko Academic
Music Theatre; the Quintet features Ivan Mozgovenko, a clarinettist and Peoples Artist of Russia, and the Komitas Quartet, one of the oldest chamber ensembles of this country; and the Piano Variations are performed by Maria Grinberg.