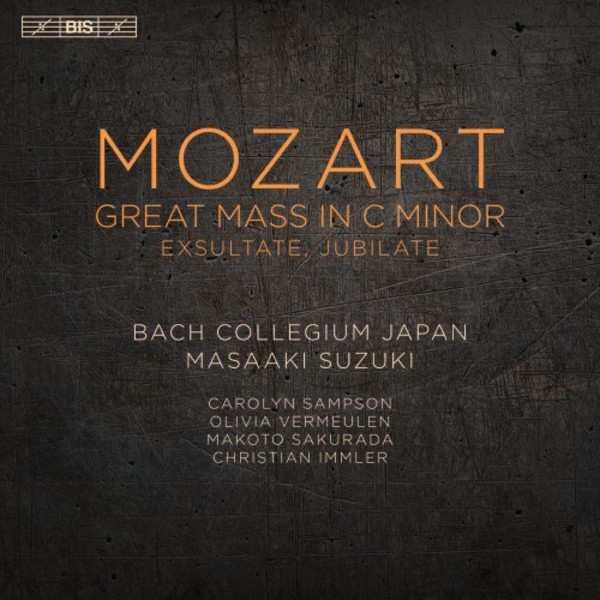 Following on the 2015 release of Mozarts Requiem, Masaaki Suzuki and his Bach Collegium Japan have gone on to record the composers Mass in C minor, K427  the Great Mass. As the nickname indicates it is a work of unusual proportions for a mass of the Classical period  or would have been so, had Mozart completed it. It is not known for what occasion Mozart intended the work, but a letter to his father Leopold dated 4 January 1783 indicates that he may have committed himself to writing it in connection with his marriage to Constanze and a planned visit to Salzburg. A performance of parts of the Mass did take place in Salzburg in October 1783, with Constanze performing the prominent soprano part. Two years later Mozart reused the music from the Kyrie and Gloria sections in the sacred cantata Davidde penitente, K469, but the Mass itself was left incomplete. The present performance includes the sections completed by Mozart himself, as well as those sections for which extensive sketches by Mozart provided a basis for completion (by Franz Beyer in 1989). Three of Suzukis soloists also took part in the recording of the Requiem, while the Dutch mezzo-soprano Olivia Vermeulen makes her first appearance on BIS, shining in the aria Laudamus te. The disc closes with the celebrated cantata Exsultate, jubilate in which the soprano Carolyn Sampson glitters in the virtuosic solo part. As an appendix to the programme she and the Bach Collegium Japan orchestra also repeat the initial aria, in a less well-known later version with a slightly different text and with flutes replacing the oboes of the original.

As the mysterious opening bars of the Kyrie gradually emerge into the light, we know that this recording of Mozarts glorious Great Mass in C minor is a special one: the tempi perfect, the unfolding drama of the choral writing so carefully judged, and, above it all, the crystalline beauty of soloist Carolyn Sampsons soprano, floating like a ministering angel. Masaaki Suzukis meticulous attention to detail, so rewarding in his remarkable Bach recordings, shines throughout this disc, the playing alert, the choir responsive, the soloists thrilling.  Stephen Pritchard
The Observer 16 October 2016

Period-instrument C minor Masses get better and better. The bar was set in the mid 1980s by Gardiner and Hogwood, then raised in the new millennium by the likes of McCreesh, Krivine and Langrée. This new recording from Japan, which joins Suzukis scholarly and startling Requiem, is fully worthy to join them. ... [Carolyn] Sampson is once again the soloist in the popular Exsultate, jubilate, the treat here being a parallel recording of the opening aria in the Salzburg version, which boasts a different text and flutes instead of oboes. As a package, the disc as a whole is certainly a winner; the Mass easily ranks alongside the period-instrument benchmarks.  David Threasher
Gramophone December 2016