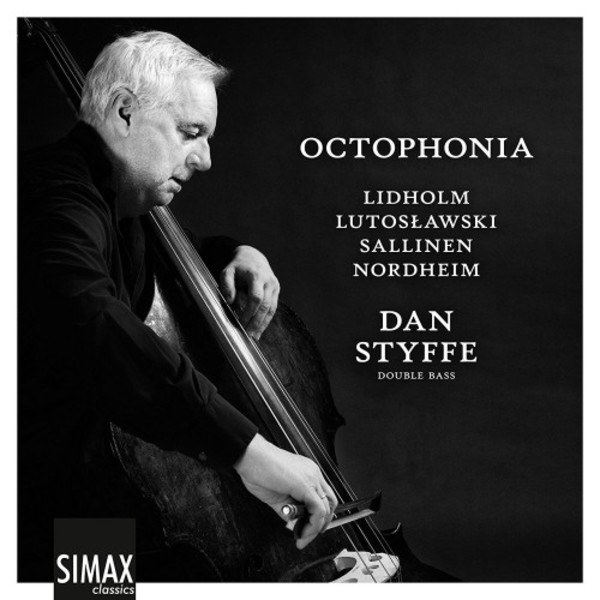 Arne Nordheim was a figurehead for the entire Norwegian post-war musical modernism. Clamavi (1980), inspired by a biblical psalm, a cry for help dividing the world into good and evil people and intentions, Partita (1982), written unusually for six double basses (performed by Styffe and several of his students, as well as Håkon Thelin) and Three Stanzas for double bass alone (1998), all feature on Octophonia.

The other music is by composers who are in various ways associated with Arne Nordheims work. Ingvar Lidholm, with whom Nordheim studied, is represented by Fantasia sopra laudi (1977). Together with Ingrid Andsnes, Styffe also plays Grave: Metamorphoses for cello and piano (1981) by Lutoslawski, a composer who, with his sound mass techniques, was an important inspiration for Nordheim. Like Nordheim, Sallinen is a composer with a social and political involvement with music beyond the purely aesthetical. His Elegy for Sebastian Knight (1964), a piece characterising a turning point in the composers practice, back to an expressive, free tonality.

Swedish-born Dan Styffe is a central figure in Norwegian musical life. He made his solo debut in 1985 and is a much sought-after soloist and chamber musician around the world. His discography is comprehensive, with several CDs and solo albums behind him, all of which received great critical acclaim. Octophonia is his sixth solo album.

Dan Styffe is easily one of the top international soloists on his instrument and a major force in contemporary music - Bass World (on Dan Styffes last album, Secret Memories, PSC1324)