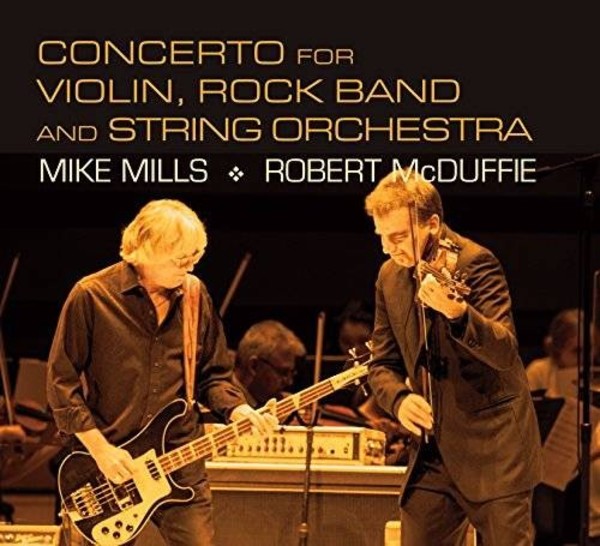 The focus had to be on the melodies, Mills says of his initial thoughts on writing the music. ...I started by writing the chords. I tried to put the melody on that, and tried to think of it with the violin in mind but since Ive never written for violin before, that was really a hypothetical approach.

This was composer Mike Millss approach to composing his first work for the concert hall after a long career as a member of the successful rock band R.E.M.. His 2016 Concerto for Violin, Rock Band and String Orchestra, recorded here in its world premiere recording on Orange Mountain Music, features virtuoso Robert McDuffie, an all-star ensemble of rock musicians including John Neff, Williams Tonks, Patrick Ferguson, masterful string arrangements by David Mallamud, and the MCS Ensemble - an elite group of string players from the McDuffie Center for Strings. The Concerto is the product of a long-time friendship between violinist Robert McDuffie and his friend Mills also from Georgia. The piece is cast in six movements and oscillates between fantastic ensemble playing to the sweeping melodies which are the hallmarks of the best of Mills writing as he did when with R.E.M.. The result is a true collaboration of gifted musical piers.

The recording is rounded out by a fresh new interpretation of American composer John Adamss Road Movies for
violin and piano with McDuffie teaming up with pianist Elizabeth Pridgen. The programme is completed by a new recording of Philip Glasss Symphony No.3 for strings featuring the MCS Ensemble under conductor Ward Stare (music director of the Rochester Philiharmonic and Lyric Opera of Chicago regular). Produced by Michael Riesman, this recording showcases three American composers, a Minimalist, a post-Minimalist, and a rock star.