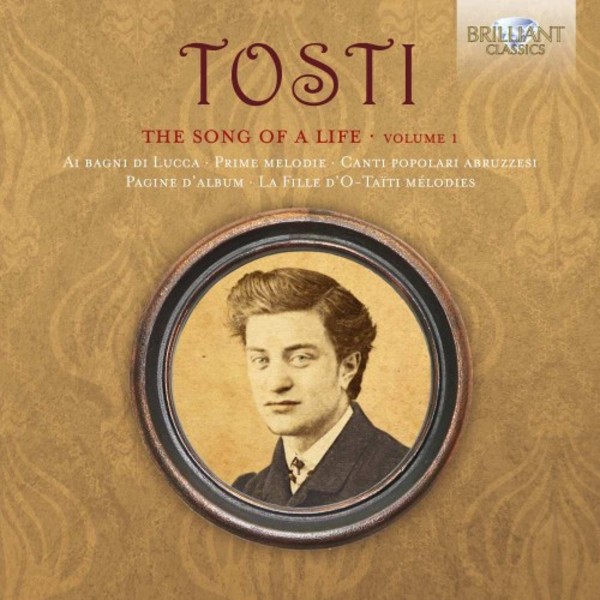 This set inaugurates the first complete recording of Paolo Tostis songs on the occasion of the first centenary of his death. As such it is a project of considerable historical and cultural significance. Most of the performers are native Italians, and all have the command of language which so marked Tostis contribution to the world of song, and sees him still performed around the world today. His style recognised no barriers between popular and art music, and was all the more commercially successful for it.

Perhaps that success has contributed since his death to a certain snobbery which has led to his songs being neglected in the concert hall and more familiar from recordings, particularly those made in a Golden Age of Italian singing from the first decades of the last century. Where would Caruso be without Tosti? Singer and song, each fitted the other, hand in glove.

Tosti should properly be known as Sir Paolo Tosti. Having first visited London in 1875, he settled there five years later, became a British subject in 1906 and was knighted two years later, before finally retiring to his homeland in 1912. He composed with equal fluency in Italian, English and French, and these five discs contain many examples of ballads, serenades and love songs in all three languages.

Much else of his life and indeed his art has been little explored until now; a situation which the project should rectify. It was masterminded by the late Francesco Sanvitale, whose death in April 2015 proved no obstacle to mounting 20 concerts covering his complete songs in Foligno and Ortona, his home‐town, which formed the springboard to these studio recordings, supervised at every stage by staff from the Istituto Nazionale Tostiano. Those familiar with the composers evergreen hits such as Forever, Mattinata and Serenata should find a treasure‐trove of songs, no less abounding in wit and charm.