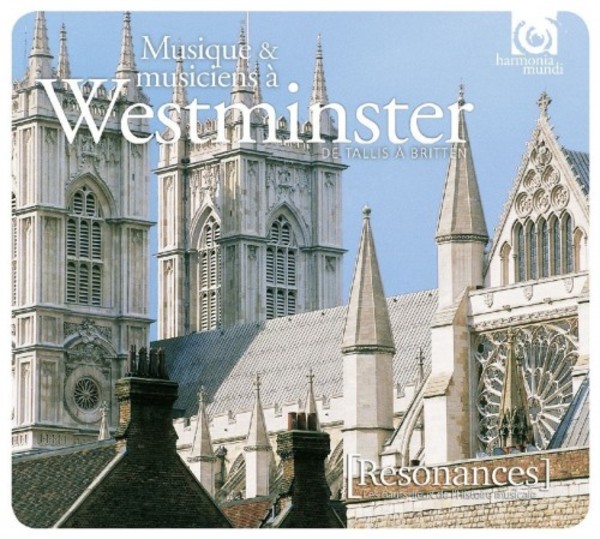 Music and musicians at Westminster Abbey: from Tallis to Britten

Not unto us, O Lord
Voluntary in C major

O clap your hands
See, see the Word is incarnate

The Blessed Son of God
The truth sent from above (traditional)

Not unto us, O Lord
Voluntary in C major

O clap your hands
See, see the Word is incarnate

The Blessed Son of God
The truth sent from above (traditional)

Have you ever stopped to think that some exceptional music has been composed and performed in the monuments and historic sites we all visit?
From America to Europe, from New York to Vienna, Paris, Berlin, Venice and Granada, for over a 1000 years, the greatest composers have devoted their most beautiful masterpieces to these monuments. These memory sites o er in nite musical riches.
[Resonances] draws on Harmonia Mundis prestigious back catalogue to restore this monumental heritage: 8 volumes of 2 discs, complete with illustrated booklets, maps and chronologies, accompanied by a comprehensive website.
Westminster Abbey, the church at which all English monarchs have been crowned since 1066, is one of the great musical centres of the United Kingdom. Over the centuries, leading British organists, singers and composers have been closely associated with the abbey, which still plays a preponderant role in the musical and cultural life of the realm. From Orlando Gibbons to Benjamin Britten, this two-disc anthology presents a musical tour of this prestigious monument, its cloisters and the grandiose abbey church itself. A musical guide complete with plan to take you on a sumptuous pilgrimage through five centuries of creation.