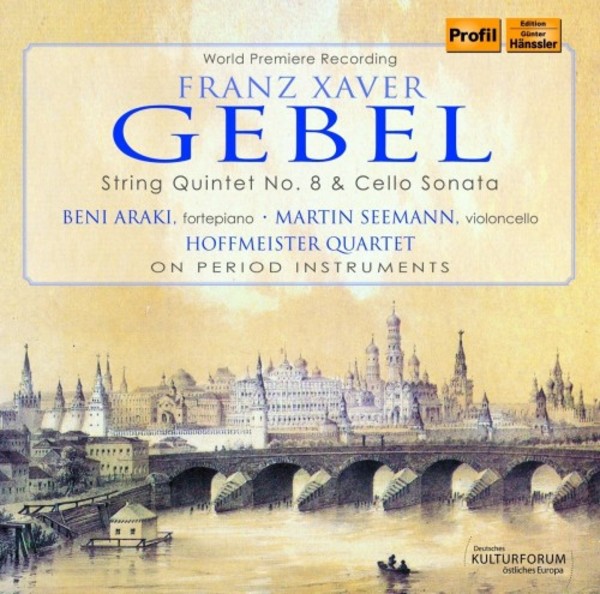 Franz Xaver Gebel was born in Fürstenau (Milin) near Breslau (Wrocław) in 1787 and received his musical education in Vienna, as did many of his Silesian peers. His list of teachers included Abbé Vogler and Johann Georg Albrechtsberger. In Vienna, Gebel was engaged at first as the director of music at the Theater in Leopoldstadt and published some compositions including the Great Sonata for pianoforte and violoncello. After working as a director of music in Vienna, Pest, Hermannstadt (Sibiu), and Lemberg (now Lviv in Western Ukraine), he ended up in Moscow in 1817, where he spent the rest of his life and gave private lessons for piano and composition. Some of his famous students included young philosophers and literati like Nikolai Stankevich and Nikolai Ogaryov, and other individuals who were significant for the later musical culture in Moscow: the author and music critic Nikolai Melgunow and the pianist Alexander Villoing, who was engaged as a teacher to the young Anton Rubinstein from 1837 and can be considered the founder of the Russian school for pianists. Of the pieces Gebel composed in Moscow, seven string quintets and one string quartet were printed in his last years in Moscow. Also a Russian translation of his composition studies was published  this was the first textbook on musical composition in Russian! We can find considerable appreciation of Gebels merits for the Moscow musical culture in the obituary by the anonymous Muscovite correspondent in the Leipzig Allgemeine musikalische Zeitung from June 23, 1843. The adored and respected composer and pianist was eulogized there as follows:

Gebel was born in Breslau and lived here [in Moscow] for 35 years, in ceaseless dedication to improving musical tastes. As a pianist and theorist, he taught for 10 rubles an hour in the best homes and was highly esteemed as a master of his art. He lived - as every true artist - more for heaven than for earth. He did not worship money. If a poetic thought surprised him, he often forgot for weeks to give his lessons and sat at his desk putting his thoughts onto paper []. Earlier, a select circle of art connoisseurs and art lovers, who purchased season tickets during the winter, were treated to a cycle including Gebels own work and that of other masters. These performances were composed of quartet and quintets and moved audiences into rapt awe by transporting them with truly beautiful pieces. Participants in these soirées look back on those occasions with great pleasure.

Subscribers to Gebels evenings of chamber music had purchased tickets to what was probably the first public chamber concerts in Moscow, where they heard sophisticated pieces by Ludwig van Beethoven, and also quartets and quintets by Gebel himself. Gebels compositions apparently made quite an impression on his contemporaries. Almost 20 years after Gebels death, the String Quintet No.8 and the Double Quintet Op.28 were published at the Julius Schuberth publishing house in Leipzig in 1862. Today, this composer has mostly been forgotten in Russia as well as everywhere else.