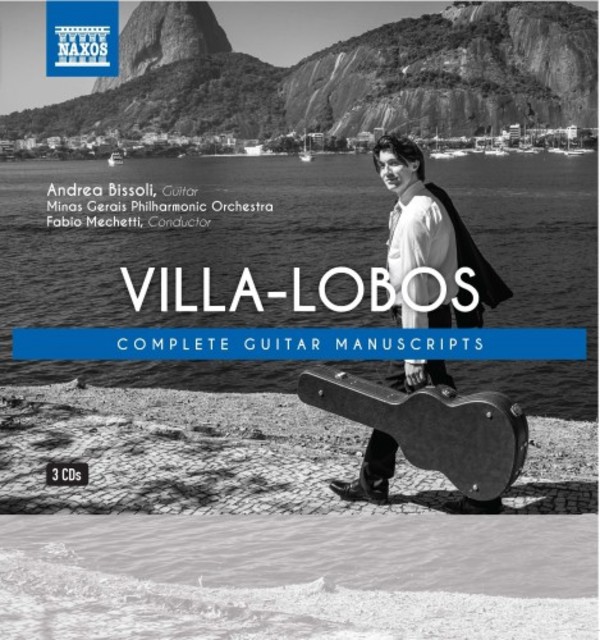 Award-winning Italian guitarist Andrea Bissoli has made a significant contribution to Villa-Loboss status as a composer for the guitar, both through his extensive and ground-breaking research, and his musicianship, characterised by MusicWeb International as a hot spring of bubbling energy and rejuvenating zest. This set includes both the rare and the recently discovered (some works long assumed to be lost), as well as Bissolis completion of the unfinished Valsa Concerto No.2 and his folk ensemble instrumentation of fourteen songs from the Guia prático. Bissoli also performs the Concerto written for the legendary Segovia.

The Italian guitarist Andrea Bissoli had his first lessons with his brothers, later studying with Giuseppe Maderni. When he was thirteen he gave his first recital in his hometown, performing Villa-Loboss Cinq Préludes, later adding works by Turina, Albéniz and several of Villa-Loboss Études to his repertoire, performances of which won him prizes at competitions for young musicians. He studied with Laura Mondiello, Paul Galbraith, Oscar Ghiglia and Alirio Díaz, and has won awards at several guitar competitions in his native Italy, including the Premio Città di Parma, Premio Nazionale delle Arti, Città di Voghera, Città di Arezzo, A.GI.MUS. and Rocco Peruggini. He has studied the works of Villa-Lobos for some nine years, and has written articles for Il Fronimo.