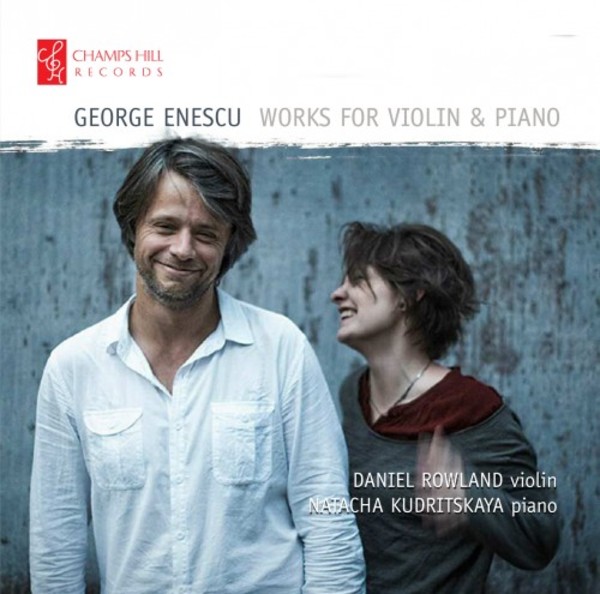 As the teacher of such prodigious violinists like Yehudi Menuhin, Christian Ferras, Ivry Gitlis, Arthur Grumiaux and Ida Haendel, George Enescu is widely celebrated as one of the worlds greatest violinists of his generation, a fine conductor and by far the most significant composer of his native Romania. The three works on this new recording by Daniel Rowland and Natacha Kudritskaya demonstrate the wide scope of Enescus musical language.

The Violin Sonata No.2 was completed in 1899, following Enescus remarkable success two years earlier with his Poème Roumain, which had secured him overnight fame and the patronage of the Queen of Romania. It is a distinctive work, with a purposeful sense of unity and largely derived from its long, sombre and mysterious theme opening theme.

By contrast, the 1926 Violin Sonata No.3 is inspired by the doina  a slow and melancholic song that embodies a particular character of Romanian music that Enescu described as: Dreaming. And a tendency, even in fast sections, towards melancholy, towards minor keys.

Composed 14 years later, the Impressions denfance is a deeply personal work that recalls Enescus own childhood  a solitary child, who hears a gypsy musician, encounters a beggar, a caged bird and a cuckoo clock, and such living creatures or natural phenomena he might encounter in the familys garden.

Daniel Rowland has established himself on the international scene as a highly versatile, charismatic and adventurous performer, with a broad repertoire from Vivaldi to Ferneyhough. As well as appearing as a soloist, concertmaster and in his duo partnership with Natacha Kudritskaya, he is well-known as first violin of the internationally renowned Brodsky Quartet.

Natacha Kudritskaya studied in Kiev, first at the Lysenko School and then at the Tchaikovsky National Academy of Music. From 2003 she worked with the pianist Alain Planès at the Conservatoire de Paris and in 2007 she was admitted to the Conservatoires advanced course to study with Jacques Rouvier. In 2009 she was awarded the Grand Prix by the Safran Foundation for Music and featured on the Génération Spedidam program, and won first prize at the Vibrarté International Music Competition and the Robert Casadesus Prize for her performance of French music.