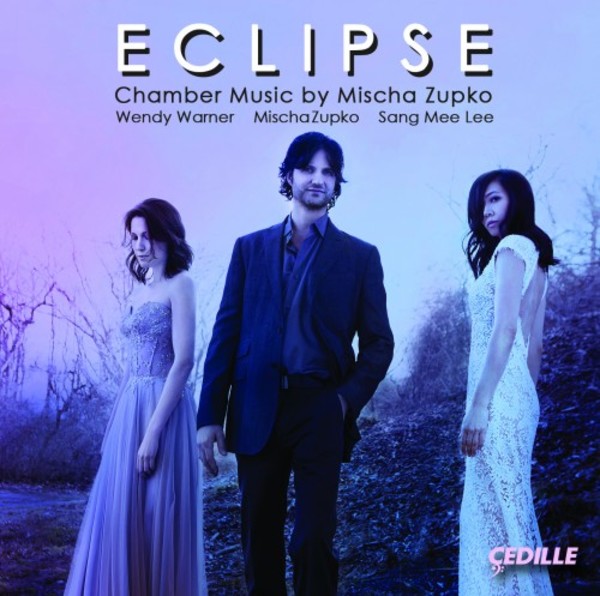 Eclipse encompasses world-premiere recordings of inventive, virtuosic, and impassioned chamber works, written in a present-day musical language by the strikingly original American composer and pianist Mischa Zupko. Joining him are two close friends and accomplished colleagues, the sublime violinist Sang Mee Lee, who chairs the string department at the Music Institute of Chicago, and internationally renowned cellist Wendy Warner, a protégé of Mstislav Rostropovich. Zupko wrote some of the works expressly for these artists.

Imbued with Zupkos heartfelt humanism, Eclipse explores themes of separation, contrast, and convergence on cosmic as well as intimate levels. In the albums centerpiece and title track, Eclipse, violin and cello approach like two celestial bodies, their distinct musical lines merging and becoming one strangely luminous entity before continuing on their trajectories across the cosmos. From Twilight and Nebula also reflect on mysteries of the distant universe. The ecstatic Rising depicts Jesuss ascension to heaven as recounted in the Gospel of Luke. The violin creates an aural illusion of a spiraling ascent while the pianos reverie evokes the earthbound faithful waiting for his return. The contrasting Fallen is a study in spiritual despair, based on a García Lorca poem. Shades of Grey for violin and piano (no relation to the similarly titled erotic romance novel) is an inventive and intricate exploration of the dynamics of personal relationships (Chicago Reader). Love Obsession for cello, piano, and six pre-recorded electronic cello tracks exudes a more visceral, single-minded passion.

Composer-in-residence at the Music Institute of Chicago, Zupko has received plaudits from The New York Times and Los Angeles Times. Hes been featured in the Chicago Reader and New Music USAs New Music Box, which called him a humble, energetic, and constantly searching artist. Chicagos New City hails him as a composer with something to say, and the adventurous listener will be rewarded.

In addition to Cedille Records Eclipse, the first recording devoted solely to Zupkos music, his work can be heard on the Innova, Crystal, and American Modern Recordings labels.