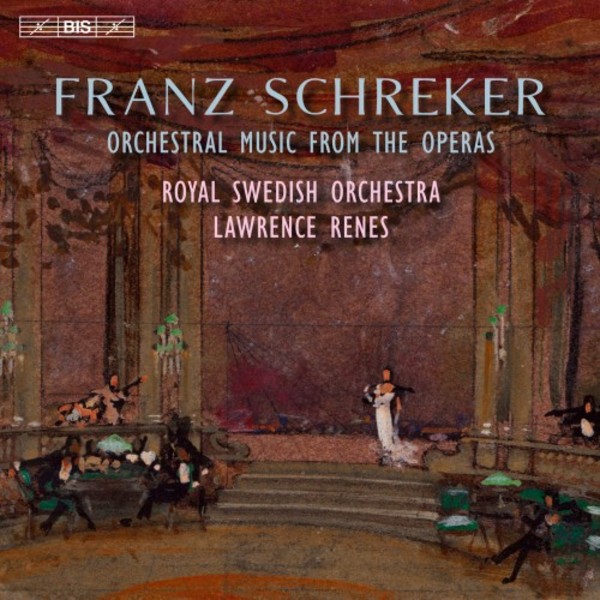 Schreker - Orchestral Music from the Operas

With the première of the opera Der ferne Klang in Frankfurt in 1912, Franz Schreker earned a reputation as one of the most eminent composers of his time. His operas with their symbolist, often erotic subjects and their sumptuous sonorities were triumphantly successful, and he was seen as one of the most prominent representatives of New Music  Arnold Schoenberg even called him one of the foremost among us. From the 1930s and onwards an almost complete oblivion descended on his music, however, and it is only during the past few years that it is being heard with any frequency again. One reason for this neglect is the fact that Schreker, like many other composers, found himself out of step with the musical developments during the 1920s, but equally important is probably the Nazi persecution that he suffered, being of Jewish descent.

Schreker composed almost exclusively operas, and with few exceptions to his own librettos, thus ensuring that his subjects were suitable for a musical treatment  indeed that they demanded such a treatment. In several of his works music plays an important part in the plot itself  in both Das Spielwerk and Der Schatzgräber a magic instrument plays a pivotal role, and in Der ferne Klang the elusive distant sound that the composer Fritz searches for so desperately is a symbol of true love.

It is therefore not surprising that the orchestral sections of Schrekers operas are of greater importance for the work as a whole than what is the case with many other composers. Often presenting them as independent pieces in concert, Schreker lavished his striking gifts as an orchestrator on them, creating shimmering, glittering and impassioned works of art. The Royal Swedish Orchestra, of the Royal Opera in Stockholm, performs them here under its chief conductor Lawrence Renes  a team which in 2013 released another sonic spectacular of operatic descent, namely an orchestral tone poem devised by Henk de Vlieger from Richard Wagners Ring des Nibelungen (BIS2052).

Lawrence Renes and the Royal Swedish Orchestra revel in the musics extravagance, delivering strongly committed and full-blooded performances supported by a crystal-clear recording that allows you to hear every detail in these intricate scores. Anyone who has a weakness for early Schoenberg, Zemlinsky and Korngold will want to ear this disc.  Erik Levi (Orchestral Choice)
BBC Music Magazine January 2017