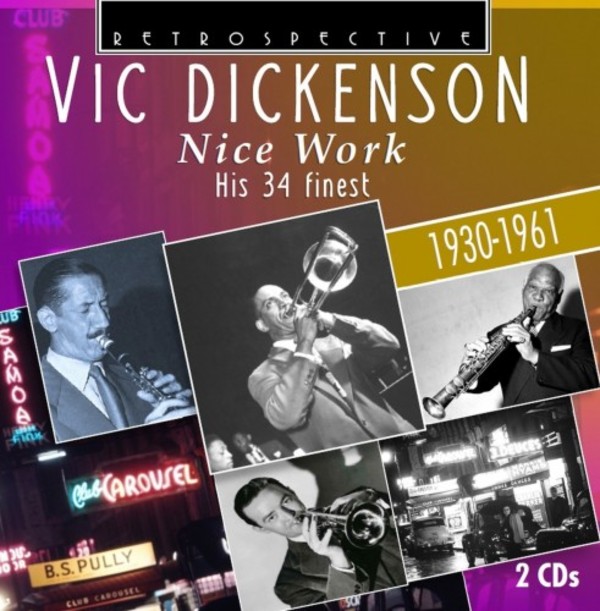 After albums celebrating the jazz trombone artistry of Jack Teagarden, Wilbur De Paris, George Chisholm and Abe Lincoln, Retrospective presents a new double album devoted to one of the most distinctive and innovative trombonists of them all: Vic Dickenson. The 34 tracks, all definitive examples of his art, give a career summary from his first recording in 1930 (as a singer!) through to the 1961 solo, Vics Spot. In between Vic plays with many of the jazz greats of the 40s and 50s: Louis Armstrong, Sidney Bechet, Sidney De Paris, Bobby Hackett, Pee Wee Russell, Eddie Condon and so on. There is a generous helping from Vic Dickensons immortal 1953/4 Septet sessions with Ruby Braff and Edmond Hall that more or less created the form of mainstream jazz.

As notewriter Digby Fairweather says: It could easily be claimed that, of all the trombonists of his era who forged a definitive musical signature of their own, Dickenson was the most technically-equipped, the most consistently musical, the most regularly humorous and arguably the most original of any of them.

CD 2 (1953-1961)
Vic Dickenson & his Septet:
1. I COVER THE WATERFRONT
George Wein & Jazz At Storyville:
2. THE LADYS IN LOVE WITH YOU
Vic Dickenson & his Septet:
3. WHEN YOU AND I WERE YOUNG, MAGGIE
4. NICE WORK IF YOU CAN GET IT
5. OLD-FASHIONED LOVE
Eddie Condon & his All-Stars Dixieland Jam:
6. WOLVERINE BLUES
7. ST. JAMES INFIRMARY
Pee Wee Russell & his Septet:
8. THAT OLD FEELING
Bobby Donaldson & his 7th Avenue Stompers:
9. BASIN STREET BLUES
10. SUNDAY
11. OH, WHAT A BEAUTIFUL MORNIN!
Vic Dickenson & his All-Star Jazz Group:
12. THE LAMP IS LOW
13. UNDECIDED
Shorty Baker & The Mainstream Sextet:
14. GIVE THE LADY WHAT SHE WANTS
George Wein & The Newport Jazz Festival All Stars:
15. LOVER, COME BACK TO ME
The Swingville All Stars:
16. VICS SPOT