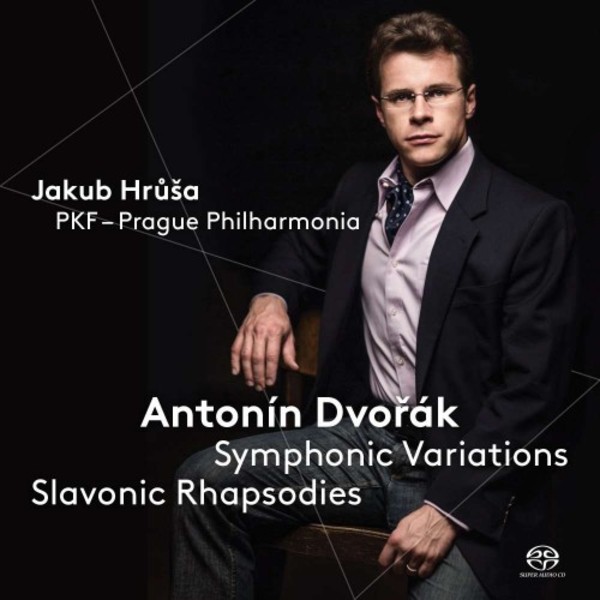 For the third of his three-album series for Pentatone, the young rising star Jakub Hrůa conducts the PKF-Prague Philharmonia in an all-Dvořák programme of appealing orchestral works comprising the evergreen favourite Symphonic Variations, op.78, coupled with the lesser known Slavonic Rhapsodies, op.45.

Already established as a tireless promoter of Czech music, Jakub Hrůa was the inaugural winner in 2015 of the Sir Charles Mackerras Prize for his advocacy of Janáčeks works, going on to receive ecstatic reviews in 2016 for Glyndebourne Operas production of The Cunning Little Vixen. One reviewer enthused that Hrůa clearly has this music in his bones and blood  he asks for (and gets) an urgent, raw and abrasive quality, expressive of nothing less than the life force itself. (The Telegraph, 13 June 2016).

This new release builds on the critical success of his earlier releases in the series. The first album of Dvořák and Lalo cello concertos was selected by Gramophone for its monthly Editors Choice which noted that the recorded sound is, like the playing, absolutely top-notch (September 2015). HR Audio also praised the album of Dvořák orchestral music for performances that were splendidly vital, stylish and beautifully shaped (February 2016). In this third album, Dvoraks unfailing gift for appealing melodies, potent rhythms and colourful orchestration are put on full display, especially in his Symphonic Variations, one of the most popular set of orchestral variations in the repertoire. Starting with a rather simple and seemingly unpromising theme, Dvořák weaves his customary magic in a series of ingenious and often witty variations which culminates in a suitably exuberant and rousing conclusion. No less winning are the three Slavonic Rhapsodies; these loosely-structured and evocative character pieces were hugely popular in his day and have lost none of their power to captivate listeners.

What else could I wish as a Czech conductor with my Czech orchestra? says Hrůa, Im really happy that Pentatone invited us to do these recordings  wonderful melodies, great rhythms, charming dances but with some depth and real drama.