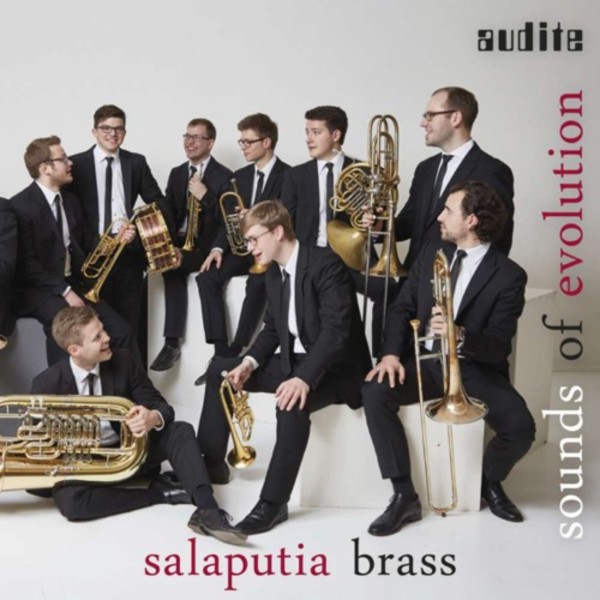 A Short Story in Brass

Fantasy on I Got Rhythm

A Short Story in Brass

Fantasy on I Got Rhythm

Unheard of and never before heard: enjoyable works for brass ensemble for and with Salaputia Brass. Seven commissioned works, eight world premieres and first recordings - the new pieces for brass ensemble (2015/14) for and with Salaputia Brass are worth listening to at every moment, always enjoyable, and never aloof or elitist. As dedicatees and performers of the works they themselves commissioned, Salaputia Brass significantly enriches the repertoire and range of recordings for brass ensemble. They make use of their many international connections along the way, performing music by Swiss, Catalan, German, Brazilian, British, and American composers, including such renowned composers as Daniel Schnyder and Derek Bourgeois. Consisting of four trumpeters (plus one alternate trumpeter), four trombonists, a French hornist, a tuba player, and a percussionist, the ensemble provides convincing evidence that "today's music" can indeed be fun, and all we can say is: They got rhythm!

The members of Salaputia Brass met already as young musicians while playing for the Bundesjugendorchester (German National Youth Orchestra), before forming the ensemble in 2007. Their success story began when they won First Prize at the Jugend musiziert national competition, continuing with a prize at the International Competition for Brass Ensembles in Passau. Scholarships from the Deutsche Stiftung Musikleben (German Foundation for Musical Life) and Erwin Fricke Foundation followed in addition to numerous concert and festival performances. Today many of the ensemble's members hold solo positions in such leading German orchestras as the Gewandhausorchester Leipzig, Gürzenich-Orchester Köln, Konzerthausorchester Berlin, Hessisches Staatsorchester Wiesbaden, Philharmonisches Staaatsorchester Hamburg, and Augsburger Philharmoniker.

The remarkable artistic development the musicians and ensemble have undergone can now be heard on their debut CD with Audite.