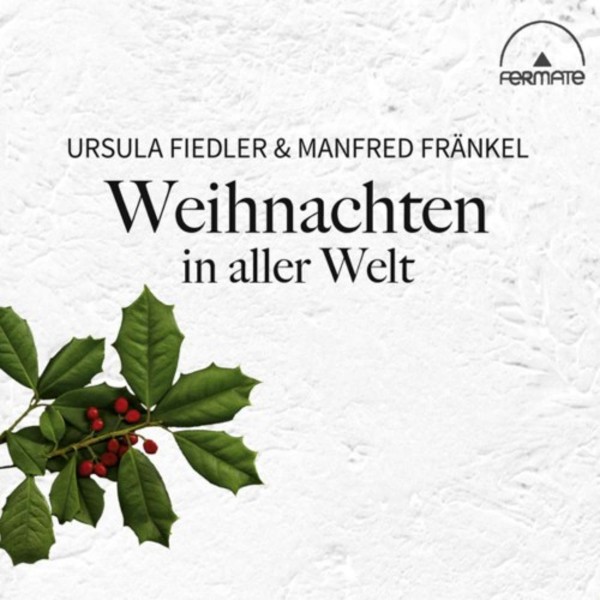 Christmas Around the World

This CD presents secular Christmas carols from Europe and South America. These traditional songs have been newly arranged by Manfred Fränkel for voice, accordion, violin and percussion instruments. The carols are intended to sound as natural as possible and yet offer something unusual. Older and more recent songbooks from a wide variety of countries served as the basis for the adaptations; in some cases the original languages were retained, and in others the texts have been translated into German. The result is an impressive kaleidoscope of folkloristic, international Christmas carols.

The different musical orientations from which Ursula Fiedler and Manfred Fränkel originally come - she from "classical music", he from "folk music" - made them curious about each other. At first, they developed a Breton-Celtic programme; the success of this encouraged them to produce this somewhat different Christmas CD with newly found, rather unconventional repertoire.

Ursula Fiedler initially studied violin in Hannover and voice in Vienna. After completing her studies, she was active for over 20 years as a freelance singer, performing in Vienna (Musikverein, Konzerthaus, St Stephen's Cathedral), Brussels, Madrid, Barcelona, Santander, New York (Avery Fisher Hall), Milan, Parma, Palermo and Berlin (Philharmonie, Konzerthaus). She was also invited to numerous festivals, including the Haydn Festival in Eisenstadt, the Schwetzingen, Potsdam, Berlin and Ludwigsburg Festivals, the Schleswig-Holstein Festival, the Ruhr Piano Festival, the Feldkirch Schubertiade and the Styriarte in Graz. A two-month walking tour from Vienna to the North Sea coast in 2008 changed her life. Since then she has primarily dedicated herself to the creation of her own programmes; in these, the point of emphasis is the combination of her violin playing with singing, both in the classical and non-classical areas.