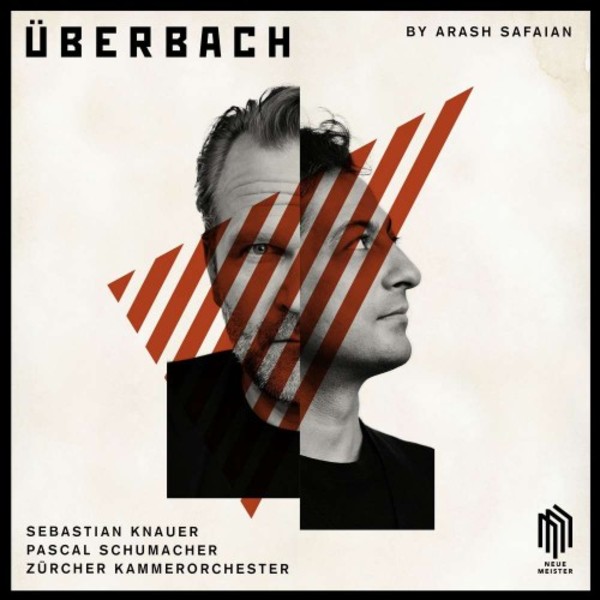 The ÜberBach album is a collection of compositions by the Munich-based composer Arash Safaian on themes by Johann Sebastian Bach. Safaian starts off with various pieces by Bach  chorales, orchestral works, organ and clavier music  and works with them to create five concertos for piano, vibraphone and chamber orchestra. Arash Safaians musical partner is the internationally acclaimed pianist Sebastian Knauer: When I heard the first example of ÜberBach, I was enthusiastic about the project at once. The virtuosity of the piano part, the melodiousness of the compositions and the closely woven sound made a deep impression on me. I imagined I was listening to Bach and yet it sounded too modern for the original.
Sebastian Knauer called his long-time musical partner, the Zurich Chamber Orchestra, the very next day. He organized the recording and further developed the project with Safaian. For the shimmering crystalline sound, the duo recruited the Luxembourg-born multi-percussionist Pascal Schumacher. He plays the vibraphone, which blends with the piano. There is also a synthesizer to enrich the sound of the basso continuo  for which Bach used the organ. The project centres on the idea of creating a form of music in which one hears Bach without Bach being heard. Arash Safaian develops the music ideas already contained in the compositions of Bach and interprets them anew: For me, Bachs works are music in its purest form. They require no deconstruction, no historical classification. What I always think is that I am hearing the grammar of music. That is why I have decided to compose music about Bachs music. That makes it like a view into a landscape that your own eye interprets in a certain way.
Arash Safaian is artist, composer and producer. He is the son of artist Ali Akbar Safaian, an important representative of Iranian modernism. Born in Teheran, he grew up in Bayreuth, where he was exposed to Richard Wagners operas at an early age. Alongside his interest in music, painting and sculpture shaped his childhood and youth. He studied painting at the Academy of Fine Arts in Nürnberg and showed his series of pictures in solo and group exhibitions, before moving to the Munich College of Music and Drama to study composition. He has made his mark as a composer with orchestral works, ensemble pieces, film music and operas  in New York (on the beach) directed by Robert Wilson at the Baryshnikov Arts Center, in Berlin (Exit Paradise) at Oper Neukölln and in Munich (At Stake) at the Opera Biennale. Safaian has won the Composition Prize of the Reinl Foundation in Vienna, the Günther Bialas Prize and Bavarias e-on Arts Prize. He has held scholarships from the Villa Concordia Bamberg, the City of Munich and Cité des artes Paris. Arash Safaian lives and works in Munich.
Includes download