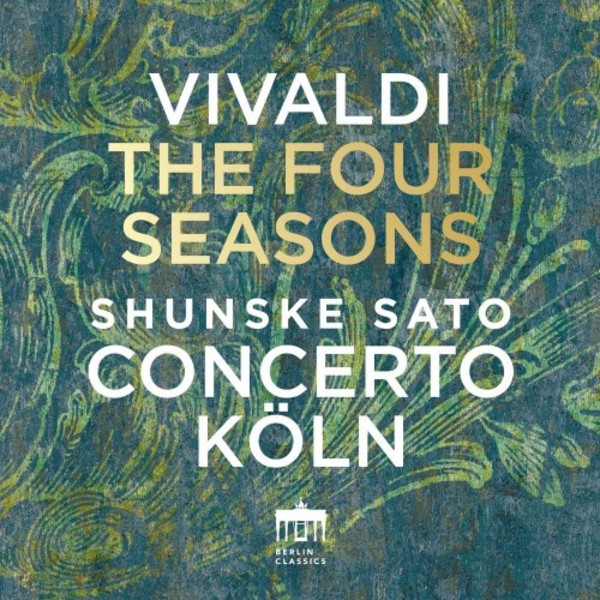 Something new every moment.  If we are to believe Shunske Sato, leader of Concerto Köln and soloist on this sparkling new release of Antonio Vivaldis Four Seasons, what is at the heart of this recording is the idea of freedom. Freedom, too, in more ways than one. True to the principles of historical performance practice, the ensemble delivers the vitality of spontaneous playing in Vivaldis music. No compromise, no tampering: the freedom of this performance situation is reflected in a recording made without cuts. And in the end it is the music itself which brings freedom. Vivaldi sometimes wrote down no more than melodic outlines, on which the soloist is to improvise. Slavishly following what is on the page? Thats an idea that was completely foreign to musicians up to the start of the 20th century. Imagination, personality and ones own view of a piece of music were what was expected, comments Sato.

Founded in Cologne in 1985 and at home on the great international concert platforms of the world ever since, Concerto Köln has developed a quite unique sound of its own, which is known and admired around the world. A major music magazine once wrote that the ensemble played antique rocknroll  rousing, raw and jovial. And that is what you can hear on these takes! It crackles and flashes and sparkles and gleams, just as if it was Vivaldi himself as the fiddler. How often have you heard Summer as torrid, the drunkard in Autumn as tipsy, Winter so brrrr! The Four Seasons are joined by two other works of Vivaldis, showing other aspects of the composer and rounding out our picture of him: the sad and sorrowful Good Friday music Al Santo sepolcro and the Concerto RV 156, which may be the most beautiful concerto Vivaldi ever wrote. That last work has accompanied Concerto Köln to their concerts for many years; it is one of the ensembles favourite encores.

The brilliant recording technique centred on a microphone configuration designed for the purpose by audio specialist MBL underlines the improvisational approach of Sato and Concerto Köln. Music works with space. Music is created in space. It is only the vibration of the air and the varying reverberation of the walls that creates a sound to carry a message, flowing and moving us. That is why we chose the Paterskirche in Kempen, celebrated for its acoustics, for our recording together with Concerto Köln, explains Jürgen Reis, the sound technician who made this recording. No cuts, no stopping and starting, just one take, no compressors or artificial resonance  the recording documents an end-to-end performance by musicians at the highest level of concentration  a challenge not only for the ensemble but for the recording system as well. The main microphone pair was a couple of Sennheiser MKH 8040 lightweight diaphragm HF condenser microphones, acoustically transparent, so as to record the environment as it is, documenting the dynamics of the playing as they actually arose in performance. A pair of spot microphones was quite lightly blended in, slightly modified MXL V6 full diaphragm condenser microphones. MBL and Concerto Köln have been linked since 2009 in a close partnership that has enabled the ensemble to acquire new understanding of the sound and the reproduction of recordings, which in turn has fed back into their own playing.

This recording of Vivaldis Four Seasons and other works by the Venetian maestro takes Concerto Köln along new paths and closes a gap in the ensembles discography. Three decades after the orchestras foundation, with over 60 CDs to their credit, Concerto Köln are recording Vivaldis best known work for the very first time.

Concerto Köln and the Four Seasons simply go well together, is all Sato will reveal  especially when the music sounds so natural and immediate as if one was hearing it live at a concert.