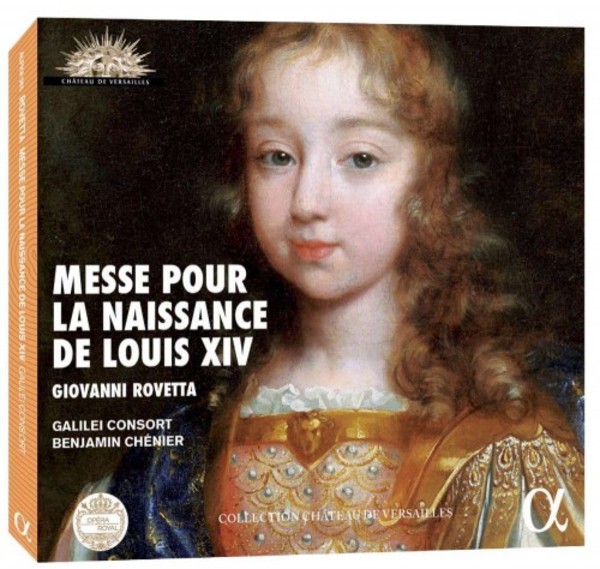 In 1638 Louis-Dieudonné, destined to become King of France under the name of Louis XIV, was born at last. Louis XIII instructed his ambassadors to celebrate the event with pomp and circumstance. In Venice, whose commercial vitality gave it a dominant role in Europe, four days of festivities were organised in honour of the French Dauphin, culminating in the performance at San Giorgio Maggiore of a solemn mass specially composed by Giovanni Rovetta, Monteverdis deputy maestro di cappella at San Marco, who was to succeed him in 1644 and become one of the leading musicians in Venice. That mass, never sung again since its first performance, was reconstructed by Benjamin Chénier in 2015 for the tercentenary of the death of Louis XIV. It is a grandiose, typically Venetian work, with all the splendour appropriate to the spirit of La Serenissima Repubblica.

The Galilei Consort, founded by the violinist Benjamin Chénier, is principally dedicated to the reconstruction of musical practices and works of seventeenth-century Italy. Such practices emerged from the humanist movement, and are personified by Vincenzo Galilei, father of the famous Galileo, who advocated a return to the Greek conception of music with primary importance accorded to the meaning of the text.

Truth to tell, his music is not the most inventive here, though there is a most impressive large-scale Credo. Giovanni Rigatti supplies other parts of the mass, and the show is stolen by Monteverdis Adoramus te, Christe. The acoustics of the Chapelle Royale at Versailles make a good setting for Benjamin Chéniers lively singers and players.  Nicholas Kenyon
The Observer 13 November 2016