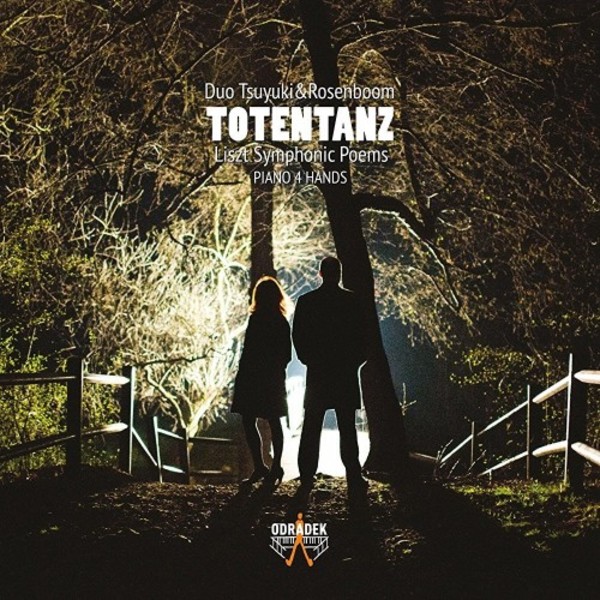 Odradek presents piano duo Chie Tsuyuki and Michael Rosenboom performing piano four hands transcriptions of Liszts most dramatic and thrilling symphonic poems.
Les Préludes takes the listener on a journey through the spectrum of human experience: love, sorrow, anger, and pastoral serenity. Mazeppa is similarly ambitious, contrasting Mazeppas wild, naked gallop with triumphant music celebrating the ecstasies of art itself. In Hunnenschlacht, the tumult of war is ultimately overcome by those striving for peace.
These works, all transcribed by Liszt himself, are heard alongside the Duos own transcription of the Paraphrase on Dies irae, also known as Totentanz, for piano four hands. Late 19th-century developments in piano manufacture were perfectly timed for Liszt, who was able to use the augmented capabilities of the instrument as the perfect vessel into which he could pour his passion and showmanship.
The Duos arrangement of Totentanz on this disc takes this utilisation of the pianos potential to its logical conclusion, using modern prepared piano techniques to add extra aural dimensions to Liszts original score, vividly conjuring up the rattling bones, tolling bells, and heavenly harps evoked by Liszts main inspiration for the work, Holbeins haunting Todtentanz woodcuts.
Liszts arrangements of his symphonic works for piano four hands are still played remarkably rarely. Yet, just as many of his transcriptions for piano solo have recently become established as an independent and emancipated concert repertoire, it is surely time for his four hands transcriptions to experience a similar renaissance.
This disc is the perfect place to start exploring such scintillating repertoire.