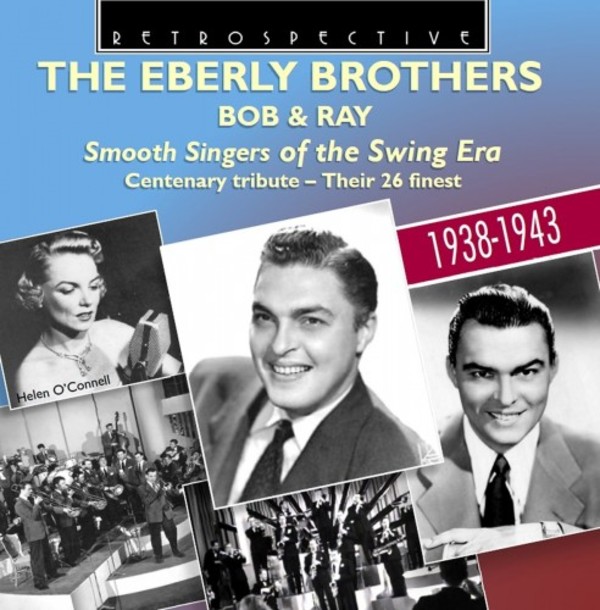 The Eberly Brothers: Smooth Singers of the Swing Era

24 July 2016 marks the centenary of Bob Eberly (1916-1981), the elder of the Eberly brothers. Unlike their later near namesakes, Don & Phil Everly, Bob Eberly and Ray Eberle (1919-1979; N.B. Eberle was the family name; Bob changed his to Eberly to avoid mispronunciation on the radio) were never a professional double act. Nevertheless, between them they enjoyed a phenomenal 133 record chart entries (68 for Bob, 65 for Ray, compared with just 26 for the Everlys)! Certainly for a golden period at the height of the Swing Era theirs were the distinctive voices of the age. Bobs huge hits  Amapola, Besame Mucho, Tangerine etc.  were all as vocalist of the Jimmy Dorsey Orchestra, while Rays  Moonlight Cocktail, Over the Rainbow, Stairway to the Stars etc.  were all with the Glenn Miller Orchestra. Retrospectives juxtaposition of 13 of each singers finest recordings offers a unique snapshot of the taste for romantic music during World War II. Of 26 original 78s, there are nineteen No.1s, six No.2s and one No.3.
So why do neither of them remain the household names they were in their heyday? The answer lies in the fact that this was the Big Band Era; the stars were the bandleaders, and their vocalists had to forge solo careers if they wished to be remembered by posterity  which, unlike Frank Sinatra, neither Bob nor Ray did. Yet the comparable successes of the two singing siblings is almost unparalleled in popular music history.
Contents:
1 Change Partners (Bob)
2 Wishing Will Make It So (Ray)
3 Deep Purple (Bob)
4 Stairway to the Stars (Ray)
5 The Breeze and I (Bob)
6 Moon Love (Ray)
7 I Hear a Rhapsody (Bob)
8 Over the Rainbow (Ray)
9 High on a Windy Hill (Bob)
10 My Prayer (Ray)
11 Amapola (Bob with Helen OConnell)
12 Imagination (Ray)
13 Yours (Bob with Helen OConnell)
14 Say It Over and Over Again (Ray)
15 Maria Elena (Bob)
16 Fools Rush In (Ray)
17 Green Eyes (Bob with Helen OConnell)
18 Blueberry Hill (Ray)
19 Blue Champagne (Bob)
20 A Nightingale Sang in Berkeley Square (Ray)
21 Tangerine (Bob with Helen OConnell)
22 Elmers Tune (Ray With The Modernaires)
23 Besame Mucho (Bob With Kitty Kallen)
24 Moonlight Cocktail (Ray with The Modernaires)
25 Star Eyes (Bob with Kitty Kallen)
26 Serenade in Blue (Ray with The Modernaires)