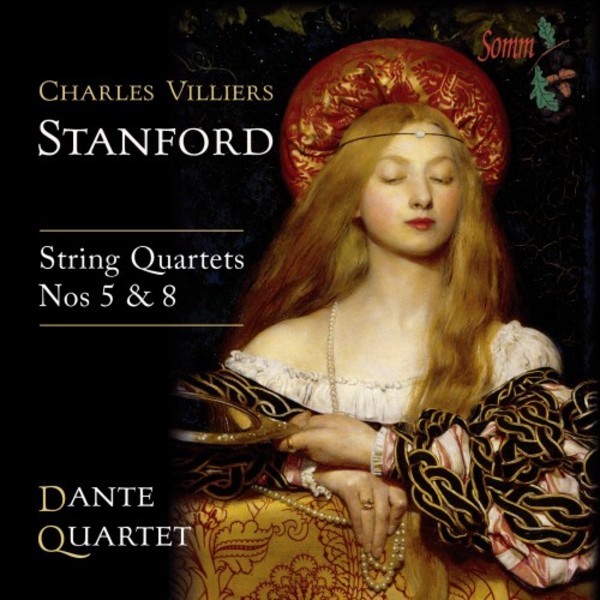 This Somm release signals the start of a significant new series of String Quartets which, quite unbelievably, have never been recorded before (apart from Nos 1 and 2), and these are the Eight Quartets by Sir Charles Villiers Stanford. This first disc, recorded for Somm by the Dante Quartet, one of Britain's finest ensembles, contains Quartets Nos 5 and 8 and on the evidence of this first disc, they deserve to gain their rightful place among the great quartets of the early 20th century. They are a major body of work written between 1891 and 1921 and have rarely been performed, even though they are an eloquent witness of Stanford's undoubted ability as a composer of chamber music.

Stanford invested a lot of his creative powers in his eight string quartets which are all 'big-boned' intellectual works, yet full of vibrantly appealing melodies, structural invention and variety, and, typical of Stanford, they reveal a consummate understanding of the idiom. With the exception of Robert Simpson, no other British composer has devoted so much effort to the quartet idiom, yet Stanford's works still remain thoroughly neglected. Much of this is down to the unavailability of performing materials since four of the quartets, Nos 4, 6, 7 and 8, are still unpublished and require editorial work for performance and recording. Somm is grateful to Professor Jeremy Dibble for his editorial work and for being the guiding light in the recording of this first disc.

Stanford wrote the Fifth Quartet in memory of his friend and mentor, the violinist Joseph Joachim who died in 1907. In this Quartet Stanford included his own personal tribute in each of the four movements, a motto 'quotation' from the opening bars of Joachim's Romance Op.2 no.1 for violin and piano, which we have included in this recording for its strong connection to Quartet No.5. Quartet No.8 was written late in Stanford's life and for all its light-hearted gestures it is a dark, introspective work in a minor key. Yet it shows a high level of invention typical of Stanford's romantic style and clean classical thinking.