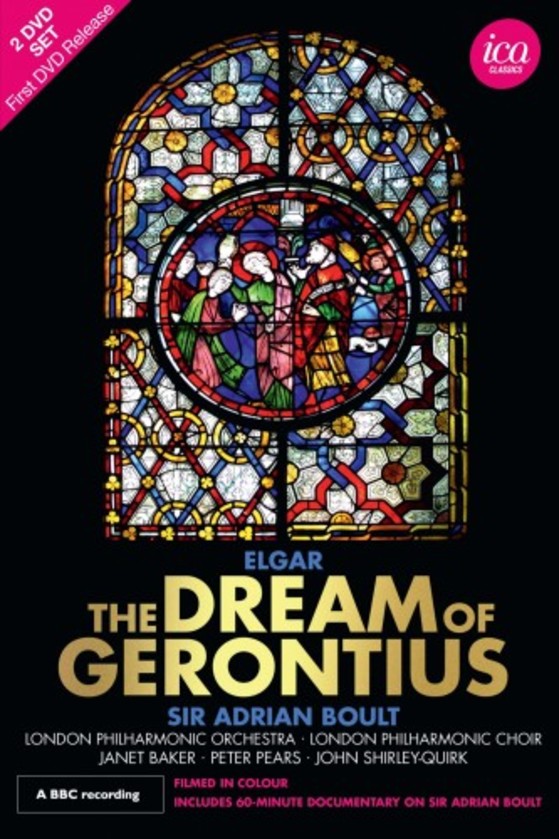 Elgar - The Dream of Gerontius (DVD)

Sir Adrian Boult was a supreme interpreter of Elgars music, winning accolades and awards for performances and recordings. Boult championed his music throughout his conducting life following the composers prophetic words in a letter to Boult in 1920, I feel that my reputation in the future is safe in your hands.

Boult only made one recording of The Dream of Gerontius, in 1975, of which the Penguin Guide enthused, Boults total dedication is matched by his powerful sense of drama the spiritual feeling is intense throughout, while The Gramophone Guide ended their review with Boult directs with commendable energy and typical humanity. A document to be treasured.

This DVD represents the only existing film of Boult conducting The Dream of Gerontius, filmed in Canterbury Cathedral in 1968.

The performance features a stellar cast of soloists: Dame Janet Baker, a leading interpreter of The Angel in The Dream of Gerontius, who recorded the role twice, in 1964 in Sir John Barbirollis famous recording, and in 1986 under Sir Simon Rattle; John Shirley Quirk who, with Boult, recorded a definitive interpretation of Peter in The Kingdom and about whom Boult said J.S.-Q. [] was perfection and I dont think any of the old guard could surpass [him]; and Peter Pears, who recorded the work in 1972 under the direction of his close friend Benjamin Britten.

The film uses the original BBC master which is far superior to the poor copies which have been in circulation over the years.

This was the first classical music production filmed in colour, for which Brian Large, an understanding musician as well as a brilliant producer in Boults words, had secured eight out of the nine colour TV cameras existing in the UK at that time.

This DVD also features a 60-minute documentary on Sir Adrian Boult as a bonus. This film was produced in 1989 by the BBC to celebrate Sir Adrian Boults 100th anniversary.

The booklet includes a note written by Andrew Neil, from the Elgar Society, as well as a long extract from Sir Adrian Boults biography in which Boult gave his extended insight on the filming. The booklet also includes the sung text in English.

As television presentations go, this often treasurable account of Elgars The Dream of Gerontius is very much of its time  1968. The location was Canterbury Cathedral and producer Brian Large was going to make the most of it. ... It isnt subtle (on the contrary), it isnt discreet, but it gives you a sense of place and it takes great pains to move as far away as is possible from the standard BBC point-and-shoot approach to music broadcasts. ... The second disc offers a fascinating documentary profile (from 1989) of Boult, presented and narrated with compelling insight by his greatest admirer and advocate, the late Vernon Handley.  Edward Seckerson
Gramophone December 2016