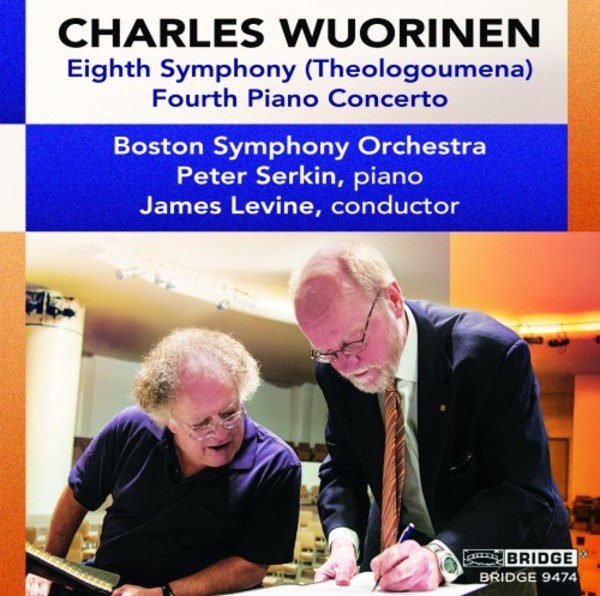 Piano Concerto no.4
Symphony no.8 (Theologoumena)

Piano Concerto no.4
Symphony no.8 (Theologoumena)

In 2004, James Levine became music director of the Boston Symphony Orchestra. Levine immediately began to commission major new works from leading American composers, including the two works recorded here. Wuorinen's Fourth Piano Concerto, written for the BSO, James Levine, and longtime Wuorinen collaborator Peter Serkin, was one of the first of the BSO commissions Levine conducted with the orchestra, in 2005. This was followed two years later by the Eighth Symphony (Theologoumena), a BSO 125th anniversary commission premiered under Levine's direction in 2007. These spectacular recordings document the premiere performances of both of these works.

First performed in 2007 by James Levine and the Boston Symphony, Charles Wuorinens Eighth is his most recent symphony to date. ... The text suggested to Wuorinen a kind of symphonic progression, a fast-slow-fast structure in which each movement is dominated by a single type of material. It generates wiry, energetic music, sometimes densely contrapuntal, sometimes thinning out into a flamboyant instrumental solo, and all very much in the style of late Schoenberg and serial Stravinsky ... Two years earlier, the Fourth Piano Concerto had been a commission from Levine and the BSO, too  one of a number of pieces that Wuorinen has composed for Peter Serkin. Its marginally more compact and a bit less prickly than the symphony, but it remains a formidably rigorous piece.  Andrew Clements
The Guardian 27 October 2016