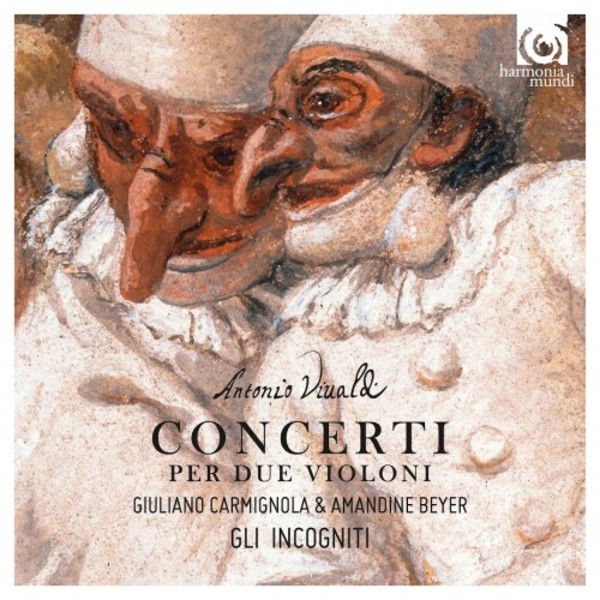 Vivaldis double concertos resemble jousts: there is bound to be comparison between the two protagonists, but in the end the triumph will be collective. And the least one can say is that Amandine Beyer and her illustrious guest Giuliano Carmignola, in his Harmonia Mundi debut, have breathed new life into this dazzling form of musical theatre!

Who better to disclose the poetic utterances of these pieces with their highly developed esprit de fantaisie than Giuliano Carmignola? I cannot think of any other violinist at the moment who feels this music with such depth and delicacy of expression and who can sustain the melodic line in a manner which mirrors the sustained style of an operatic aria. - BBC Music Magazine, January 2010

These are performances that burst with life, and right from the unaccompanied sparring between the soloists at the beginning of the first track (RV507) there is not a dull moment: the echo games in the finale of RV505 are brilliantly realised, no two of them quite the same, and even the solo-less ripieno concerto, RV127, included in the programme is somehow made urgently expressive. The tone of soloists and orchestra alike is rich and vital, and the recording has the right mix of clarity and bloom.  Lindsay Kemp
Gramophone December 2016

The musical chemistry between Carmignola and Beyer is intuitive and gratifying. Outer movements sparkle with playful vigour while centrally placed [slow] movements are poetically declaimed.  Soloists and ripieno alike respond to this wonderful music with passion, insight and a feeling for the idiom that emerges as second nature.  Nicholas Anderson (Concerto Choice)
BBC Music Magazine January 2017

Are there still revelations to be heard in new Vivaldi concerto recordings? There certainly are in this dazzling, extrovert collection of concertos all for two violins  like a tennis match in music, the two protagonists toss figures, rhythms and phrases across the net with ever-increasing excitement and intensity.  Giuliano Carmignola (who recorded with Abbados Orchestra Mozart) and Amandine Beyer match perfectly. A winner.  Nicholas Kenyon
The Observer 9 October 2016