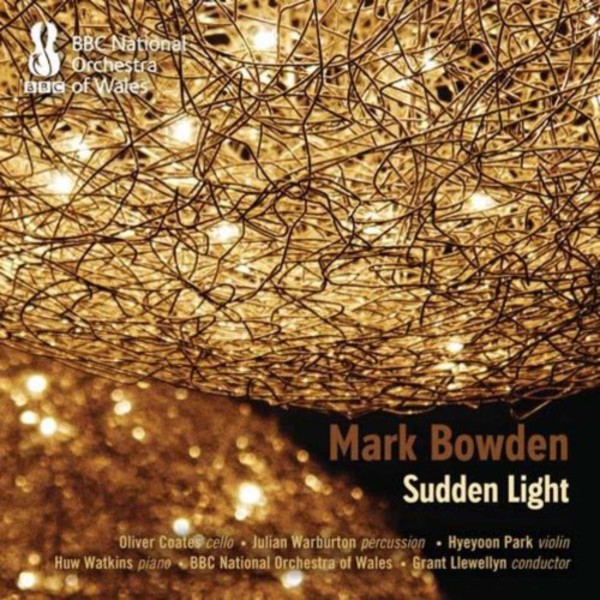 Mark Bowden's passion for orchestral writing and exploring its enormous timbral range is evident on his debut album of works written over the last decade.
The intoxicating Lyra (2011) for cello and orchestra was described as 'a richly allusive work of considerable scope and ambition' by Seen and Heard International and was Bowden's first commission, as resident composer, for BBC National Orchestra of Wales (BBC NOW). The solo cello part calls for a blistering technique and was written for Oliver Coates, who performs on this recording. The work's title and inspiration has multiple references: a constellation of stars, a bass viol from the seventeenth century, a class of Russian nuclear-powered submarines and the lead character in Philip Pullman's fantasy trilogy His Dark Materials.
Heartland (2012), also commissioned by BBC NOW, was created as both a standalone percussion concerto and a ballet score for the National Dance Company Wales. The Times review of its world premiere said that the work 'bubbles with fluid, spicy rhythms and pretty celestial ruminations ... watching Julian Warburton play it was a fascinating show in itself.
Sudden Light (2005) was inspired by Marcus du Sautoys book The Music of the Primes and explores the play of consonance and dissonance through the overtones of the harmonic series.
As a contrast to the orchestral works on this album, Five Memos (2015) is a light, airy interplay between violin and piano, performed beautifully by Hyeyoon Park (violin) and Huw Watkins (piano).

Mark Bowden was resident composer with BBC National Orchestra of Wales from 2011 to 2015. Two concertos composed during that time are the most substantial on this first disc of his works. It also contains the score with which Bowden first attracted attention, Sudden Light, which the BBC Symphony Orchestra introduced in 2005. Like the two concertos, that work comes with a package of extra-musical connnections  to Liebniz, prime numbers and a poem by Dante Gabriel Rosetti that provides the title  but its impact is a physical one: the systems Bowden sets up generate climaxes of great power, and his confidence in handling such large orchestral forces is unmistakable.  Andrew Clements
The Guardian 13 October 2016