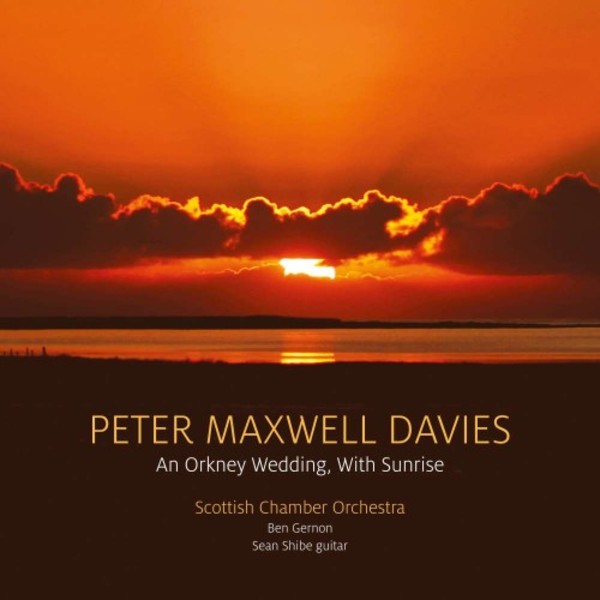 The Scottish Chamber Orchestra celebrates the life and works of its much-loved Composer Laureate Sir Peter Maxwell Davies. Maxwell Davies was closely associated with the SCO since the 1980s, when he became its composer/conductor-in-residence; this is the last recording preceding his passing in March 2016.

Maxwell Davies was one of the UK's foremost composers; he made a significant contribution to music with his prolific and wide-ranging output, which was celebrated with a 2014 BBC Prom devoted entirely to his works, and conducted by Ben Gernon.

An Orkney Wedding brilliantly portrays the beauty of the rising sun after a boozy celebration, using bagpipes to close in a blaze of light. Maxwell Davies composed the concert overture Ebb of Winter in 2014 to mark the SCOs 40th birthday. The hauntingly beautiful piece depicts a wintry landscape with the optimism of the coming spring.

The two pieces for solo guitar each demonstrate the emotional frankness of Maxwell Daviess music, from the menacing flashes of Hill Runes to the unaffected tenderness of Farewell to Stromness; young guitarist Sean Shibe is the soloist.

The Scottish Chamber Orchestra is a world-renowned orchestra; its extensive discography exceeds 150 recordings. The SCO has released five recordings with Robin Ticciati including symphonies by Schumann and Haydn and two multi-award-winning albums of Mozart with Conductor Laureate, Sir Charles Mackerras. The SCO performs throughout Scotland and the UK and appears regularly at the Edinburgh International Festival and the BBC Proms.

Sean Shibe is the first guitarist to be admitted to the prestigious BBC New Generation Artists Scheme and the only solo guitarist to have received a Borletti-Buitoni Trust Fellowship. A 2015 YCAT artist, Shibes other awards include the Royal Overseas League First Prize and Gold Medal (2011), Ivor Mairants Guitar Award (2009) and DAddarrio endorsement.

 a substantial, introspective and hauntingly beautiful piece, a depiction of the first stirrings of spring in Orkney. - The Guardian

This music was fun, the playing of the musicians superb, and it left the audience in an excited and bedazzled celebratory mood. - BachTrack

This disc by the Scottish Chamber Orchestra was not planned as a tribute to Peter Maxwell Davies, who died in March after it was recorded, but it makes a worthy and deeply felt portrait of Maxs Orkney. The ebullient and famous Orkney Wedding provides the title track, and the real discovery is Ebb of Winter from 2013, a vivid overture conjuring the wild spaces and often bleak weather of the islands that Max loved, with a wonderful openness and transparency in the orchestration.  Nicholas Kenyon
The Observer 4 September 2016