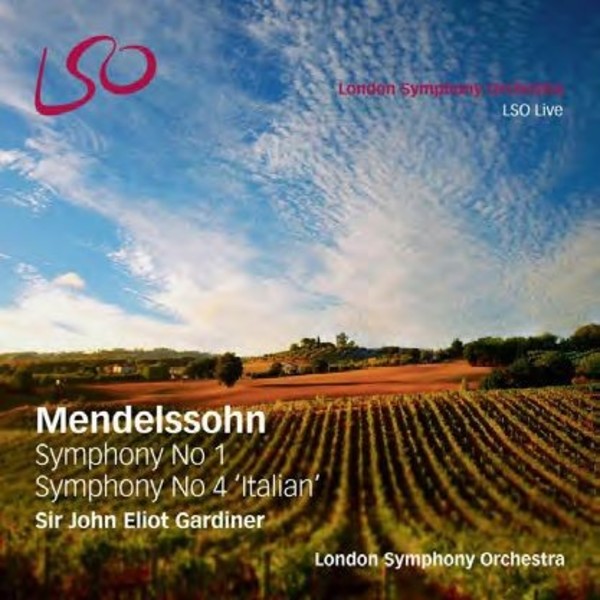 Constantly in the vanguard of enlightened interpretation, Sir John Eliot Gardiner stands as a leader in todays musical life. His award-winning Mendelssohn cycle on LSO Live showcases his period performance expertise; the LSO muscians standing to play, highlighting their individual musicianship. As Gardiner notes: "It gives a different type of dynamism and energy... it means that the fiddles are freer in the way that they attack the extremely virtuosic lines and it gives a tremendous sense of occasion to the music making."

Dramatic and harmonically adventurous, Mendelssohns Symphony No 1 is presented here in a unique format, with both the original and revised versions of the third movement. As Gardiner said when introducing the work in concert: "Its not every evening that you get to hear a symphony by a 14-and-a-half-year-old genius and theres an intriguing complication to this piece. When Mendelssohn came to London in 1829, he performed the symphony and he wrote back to his parents saying: well, I looked over my symphony and, lord, the minuet bored me to tears! So what I did was to take the scherzo from my Octet and I added a few airy trumpets and it sounded lovely. Well, actually he did an awful lot more than that; he re-orchestrated absolutely brilliantly. And its so good, we thought you should hear that version. But what about the minuet and trio? Why, when he came to publish the symphony did he use that version and leave out the scherzo? I happen to think theyre both really remarkable, as is the whole symphony, and perhaps youd let us know which you prefer...?"

The Fourth Symphony is inspired by the sights, sounds and atmosphere of Italy and is among the best loved of all the composers works. Mendelssohn himself described it as: "the jolliest piece Ive written so far." Symphony No 1 was broadcast across Europe on Mezzo TV, alongside Mendelssohns 'A Midsummer Nights Dream', and this rich video content will be shared to support the release.

Previous releases in the cycle have received widespread praise: LSO0765 Symphony No 3 Scottish, The Hebrides Overture, Schumann Piano Concerto reached #3 in the UK Specialist Classical Chart and was awarded Editors Choice by Gramophone. LSO0775 Symphony No 5 and Overtures: Ruy Blas, Calm Sea and Prosperous Voyage also charted in the UK, reaching #12, received featured airplay on Classic FM and was received warmly across international press, including 4* and 5* reviews from BBC Music Magazine and The Financial Times.

Mendelssohn was a stickler for articulation as both composer and conductor, and knew precisely where he wanted notes slurred and separated; the strings of the LSO take the most careful note and almost sing the melody as if it were set to words. ... [In the Italian] Gardiners real competition is with himself, and the Vienna Philharmonic. But again the strings of the LSO display unrivalled agility here, and even work some cheeky portamento into the third theme (at 5'20") smuggled with such sly mastery by Mendelssohn into the development. Gardiner keeps a tight lid on the themes contrapuntal workings and then blows the doors off with the recapitulation (6'20"). Taken at a true presto, the finale never quite spins out of control but sounds as though it might at any moment. Outstanding.  Peter Quantrill
Gramophone October 2016