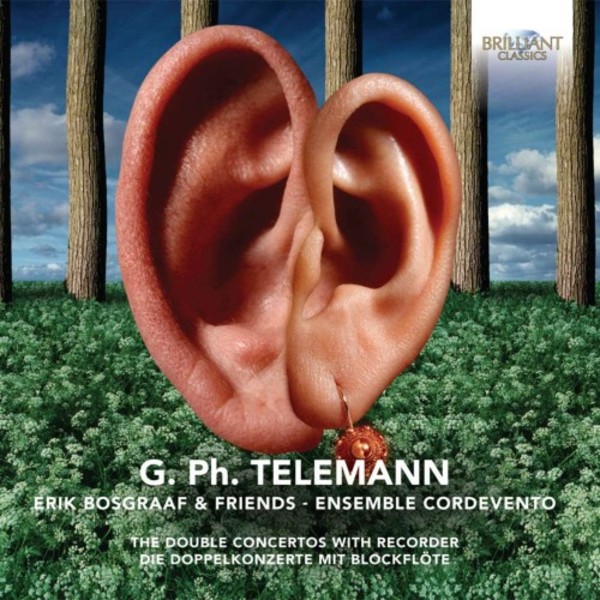 Telemann - The Double Concertos with Recorder

Erik Bosgraaf has won international acclaim for his Brilliant Classics recordings of music from Jakob van Eyck (Der Fluyten Lust Hof, BC93391) to Pierre Boulez (Dialogues, BC94842). His discography includes no fewer than three previous albums dedicated to Georg Philipp Telemann, the composer who more than any other in the German Baroque elevated the recorder and its relatives to the status of a high-art instrument, capable of hitherto undreamt expressive range and technical refinement.

Following those albums of solo fantasias, accompanied sonatas, and suites and concertos (BC93757, BC95247, BC95249), Bosgraaf now presents a selection of concertos, composed during the first decades of the eighteenth century, in which he is paired with a second soloist, be it another recorder, a bassoon or viola da gamba. Telemann himself confessed that his concertos smell of France, which may indeed be scented not only in some of their movement titles but in the stately dotted rhythms and graceful ornamentation of their slower movements.

However, Telemann also imbues ritornellos and especially solo episodes with great rhythmic drive, primarily derived from Polish folk music, and continually surprises the listener with rapid switches between short-range and long-range imitation, unpredictable rhythmic patterns and quickfire banter with the orchestra. The only conservative feature of these concertos is their four-movement form, slowfast slowfast.

Bosgraaf is partnered by his own Ensemble Cordevento and joined by distinguished period-trained instrumentalists from the UK, Germany and his native Netherlands. The album makes an ideal taster to the musical banquet which will be laid on throughout 2017, in celebration of Telemanns 250th birthday.