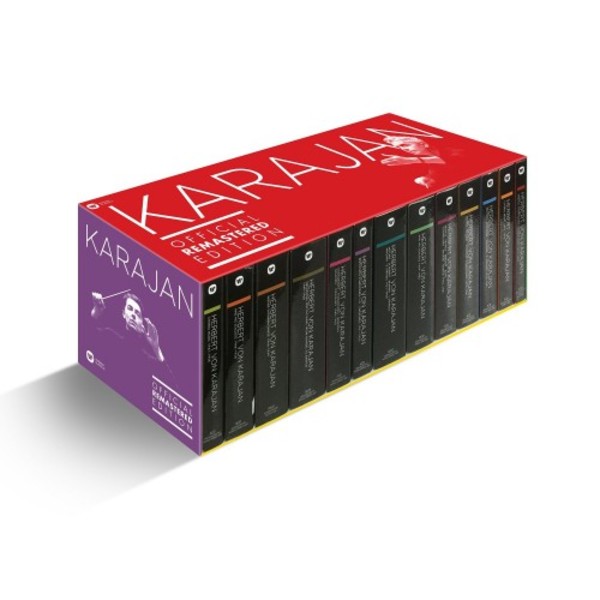 The Karajan Official Remastered Edition comprises 101 CDs across 13 box sets containing official remasterings of the finest recordings the Austrian conductor made for EMI between 1946 and 1984, and which are now a jewel of the Warner Classics catalogue.
For many, Herbert von Karajan (1908-1989)  hailed early in his career as Das Wunder Karajan (The Karajan Miracle) and known in the early 1960s as the music director of Europe  remains the ultimate embodiment of the maestro.
He was closely associated with EMI for the majority of his recording career (specifically from 1946 to 1960 and then again from 1969 to 1984). EMIs legendary producer Walter Legge sought him out in Vienna just after World War II and the long relationship that ensued embraced recordings with the Vienna Philharmonic, the Philharmonia (the orchestra founded by Legge), the Berlin Philharmonic (of which Karajan became conductor for life in 1955), the forces of La Scala, Milan, and the Orchestre de Paris.
The Karajan Official Remastered Edition features primarily symphonic and choral music. The entire edition comprises recordings remastered from the original sources in 24-bit/96kHz at Abbey Road Studios, the worlds most renowned recording studio.
Box contents:
1 The Vienna Philharmonic Recordings, 1946-1949 (10CD)
2 Choral Music: Bach/Beethoven/Brahms 1947-1958 (5CD)
3 Karajan and his soloists 1948-1958 (8CD)
4 Orchestral Spectacular from Handel to Bartók 1949-1960 (13CD)
5 Russian Music: Mussorgsky/Tchaikovsky/Borodin/Balakirev/Stravinsky 1949-1960 (7CD)
6 Beethoven: Symphonies & Overtures 1951-1955 (6CD)
7 German music: Mozart/Schubert/Brahms/J. Strauss/Wagner/R. Strauss 1951-1960 (12CD)
8 Karajan and his soloists II - 1969-1984 (10CD)
9 Berlioz-Franck-Debussy-Ravel-Tchaikovsky-Dvořák-Bartók 1970-1981 (7CD)
10 Haydn-Mozart-Schubert 1970-1981 (8CD)
11 Brahms-Bruckner-Wagner-R Strauss-Schmidt  1970-1981 (6CD)
12 Haydn-Beethoven-Brahms: The Choral Recordings 1972-1976 (5CD)
13 Sibelius 1976-1981 (4CD)