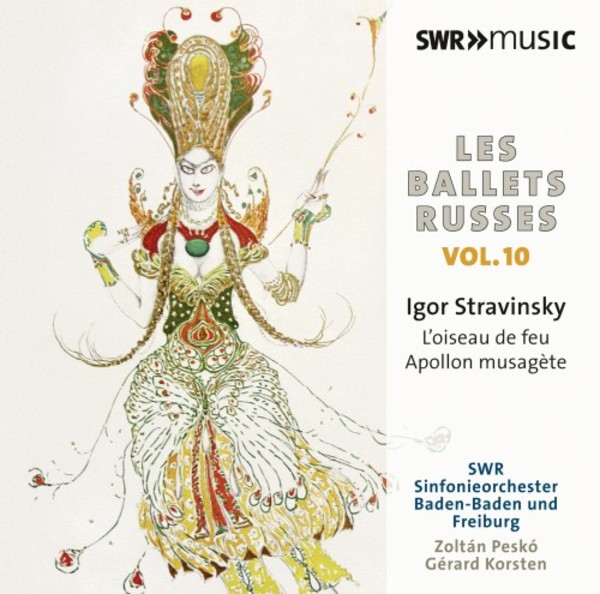 The Ballets russes was a series of ballet events held in Paris between 1909 and 1929, founded by the Russian impresario Sergei Diaghilev. He developed traditional 19th-century ballet into new expressive heights of artistic synthesis, hiring the best composers, painters, stage and costume designers and, of course, choreographers of the day. Numerous masterpieces, milestones in the history of 20th-century music, owe their existence to his initiative  among them Stravinskys Le Sacre du printemps, Debussys Prélude à laprès-midi d'un faune and Fallas Three-Cornered Hat.

The series Diaghilev  Les ballets russes, which has been supported for many years now by the SWR, has committed itself to the goal of presenting ALL the works composed for Diaghilevs ballet series, and to giving a detailed account regarding the choreography, stage design etc. in comprehensive booklet notes. The SWRmusic label is cooperating in this process with the foundation of the highly respected choreographer John Neumeier.

Furthermore, the two pieces by Stravinsky included on this CD are indisputed masterpieces of the 20th century. Composed in 1910 and 1928, they cover almost the complete life cycle of the Ballets russes. Additionally, LOiseau de feu was the young Stravinsky's first composition for the company, which later gave him the opportunity to meet the choreographer George Balanchine, while working on Apollon musagète. Their lifelong friendship was without a doubt a stroke of good fortune for the history of music and ballet. If the two works recorded here had not been created, ballet of the 20th and 21st centuries would surely have looked very different.

The Firebird transports characters from the world of colourful Russian myths and fairy tales into a contemporary stage design. The choreographer of LOiseau de feu, Michel Fokine, who was a pupil of the tsarist ballet school and dancer at the Mariinsky Theatre, was acknowledged as a reformer of his art in terms of attaining stylistic unity between libretto, dance, music and décor.

The contrast with Apollon musagète, which was performed on an empty stage, could not be greater. Official ballet history considers its première performance, in the version by George Balanchine, as the birth of modern ballet. Balanchines neoclassic vision of dancing, seen here for the first time in its pure form, would shape dance productions of the western world for the next 40 years and reach far beyond the Iron Curtain.