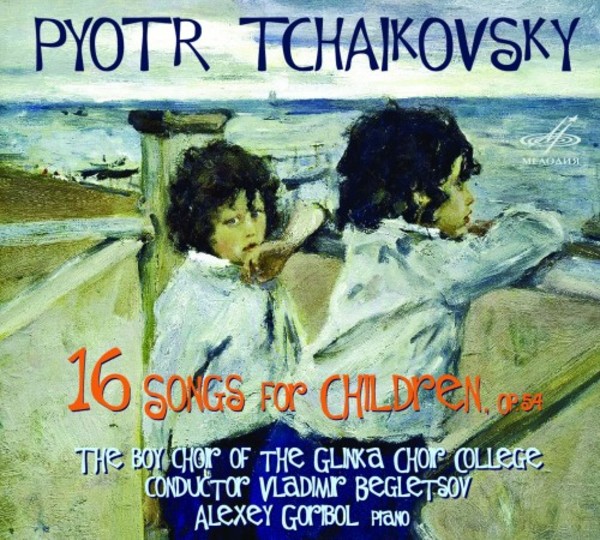 Along with a great number of very popular works, the Russian geniuss musical legacy still has some blank spots. This uncommon children vocal cycle, most part of which was written to the poems of Alexei Pleshcheyev (Ivan Surikovs The Swallow and Konstantin Aksakovs Childs Song are the rest of the poems used), is one of them. Some of the songs from the cycle are very well known, but performances or even recordings of all the sixteen songs at once have been singular.

The composer approached the childrens songs, as he called the cycle, with extraordinary ardour and affection. The author of the Childrens Album managed to capture a childs emotional world as he saw his ideal of unachievable happiness in its naïve purity.

The featured recording made in 2015, the year of Tchaikovskys 125th anniversary, was a fruit of collaboration between Alexei Goribol, an outstanding contemporary musician and Honoured Artist of Russia, and the Boys Choir of the St Petersburg Glinka Choral College. A pianist, concertmaster and organizer of numerous music festivals and solo projects, Alexei Goribol treats Tchaikovskys music with profound reverence.

The Glinka Choral College is one of the oldest music educational establishments of Russia. Its choir has performed in Russia and overseas. From 1991 to 2007, the choir was led by Vladimir Begletsov, one of the best representatives of the St Petersburg choral school and Honoured Artist of Russia. He resumed his work with the Boys Choir in 2014.

Tchaikovsky noted that some of the songs from the cycle should be sung by a choir. The Sixteen Songs for Children interpreted by Alexei Goribol and the Boys Choir will be a wonderful present to the lovers of Tchaikovskys music and choral art.