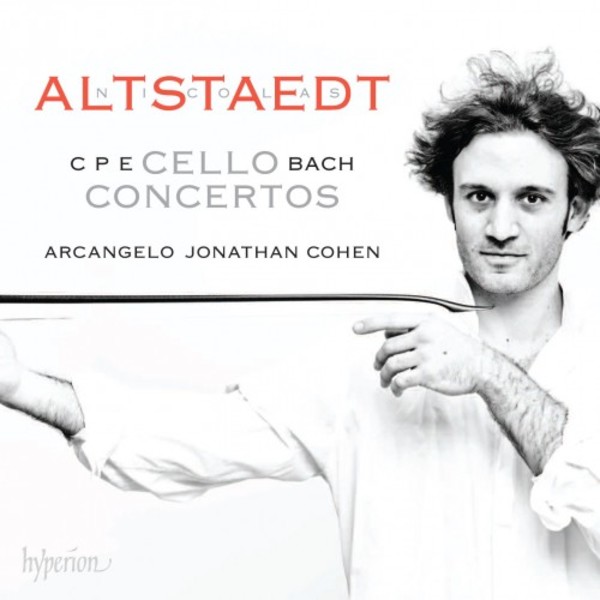 The unpredictable and fantastical qualities which are so fundamental to the music of CPE Bach are here given free rein by Nicolas Altstaedt, aided and abetted by Jonathan Cohen and Arcangelo in performances of astonishing brio.

With their strikingly compact motifs, explosive dynamic contrasts and bold harmonic surprises, the three cello concertos contain all that is best about the music of JS Bachs second son, Carl Philipp Emanuel (1714-1788). CPE Bachs music represents the apex of the musical style known as Empfindsamkeit, the sensitive style that formed a bold reaction to the clear-headed rationalism of the Enlightenment. Also thrown into the mix is the composers quick-fire wit, as well as a fine command of the late Baroque style galant. But it would be wrong to think that these are mere exercises in musical shock tactics with a smattering of poised courtliness. On the contrary, there are moments of the profoundest feeling here, as Bach explores the full extent of musical expression available to him. Not for nothing was he admired and revered in his lifetime  to a much greater extent than his unfashionably conservative father. These three works are capable of standing alongside the greatest cello concertos of subsequent generations, and in them one can hear the essential foundations of the fully-fledged classical style, with tangible pre-echoes of Mozart and Haydn at their finest.

In his famous treatise on keyboard playing, CPE Bach wrote that A musician cannot move unless he too is moved, and it is abundantly clear that the musicians on this superb new Hyperion disc  cellist Nicolas Altstaedt and the strings of the Arcangelo ensemble directed from the harpsichord by Jonathan Cohen  have responded readily to this injunction. From the scruff-of-the-neck start of the A minor Concerto onwards, these performances grab the listeners attention with richly-textured yet brilliantly alert playing. And they are helped by an ideally judged balance which favours the soloist yet allows every strand of the fabulously detailed accompaniment to be heard.

By placing the dramatic Sturm und Drang A minor work first, the performers provide us with a great curtain-raiser. Even in the hectically busy opening Allegro assai, there is space for cantabile elements, a fact underlined by Nicolas Altstaedts cadenza, which is built on a reference to the famous alto aria Es ist vollbracht from JS Bachs St John Passion. It shouldnt work, but it does, and splendidly so, demonstrating how CPEs musical language comfortably accommodates room for introspection. The C major Andante is perfectly paced as a slow dance, while the flickering finale is bold and forthright, with dazzling exchanges between soloist and orchestra and fizzing passagework.

The B flat Concerto is, on the surface, a more urbane work, but the expressiveness of the empfindsamer Stil comes to the surface in the dynamic contrasts of the central D minor Adagio, while the sparks fly in the closing Allegro assai, with more solo fireworks and rapid interplay. Altstaedt and the Arcangelo players bring out all the joy of this music, without ever losing a sense of polished style.

Best of the bunch is the A major Concerto, with its vivacious first movement and exuberant, edgy finale framing a central Largo con sordini of melting tenderness. Marked mesto (sad), this movement is one of CPE Bachs greatest achievements, and it receives a performance of such exquisite inwardness, attentive phrasing and delicate dynamic shading that it almost overshadows the rest of the disc. There are several other fine recordings of these works available, but Altstaedt here comes close to eclipsing them all. All three of these concertos also exist in versions for solo flute and solo keyboard, but these thoroughly idiomatic performances, deeply felt performances are as convincing an argument as any that the cello versions could well be the original ones.

If any disc can persuade you that CPE Bach is far more than a niche composer, it is surely this one. Excellent notes from Richard Wigmore set the seal on what will surely be regarded as one of the recordings of the year. Unmissable!

The ability to switch between Baroque and modern playing techniques is considered almost de rigeur among todays cellists. In truth, only a handful achieve a convincing style in both. Nicolas Altstaedt is onbe of that elite group: here you would think he was a Baroque full-timer, his approach is so indefinably delicate, the phrasing of CPE Bachs seductive lines limpid, the recitative hyper-articulate. The tawny warmth of his tone is perfectly attuned to the composers sound world; slow movements have an inward grace, while the fast are marked by vivid detail and natural effervescence.  Helen Wallace (Recording of the Month)
BBC Music Magazine November 2016