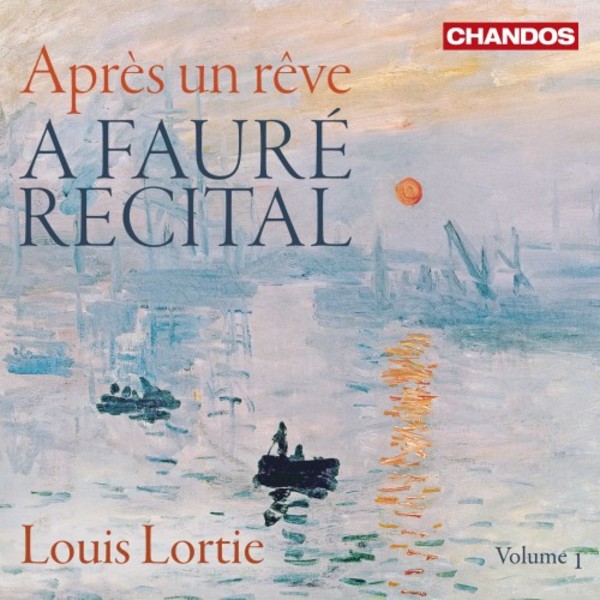 This is the first volume in Louis Lorties new series devoted to the music of Gabriel Fauré.

As he states in the booklet notes, this album purposely travels through Fauré's various creative periods, from easily appealing early pieces such as the Pavane and the mélodie Après un rêve through to the late and unjustly neglected Préludes, a masterpiece of condensed harmonic and melodic audacity.

Released after four volumes in an ongoing Chopin series  an exceptionally high order of playing (BBC Music)  this album, besides the masterful late Op.103 Préludes, unsurprisingly features in Lorties words the romantic, post-Chopinesque genres of the Nocturnes and Barcarolles along with path-breaking small forms of neoclassical aesthetics such as the suite from Pelléas et Mélisande, here in a solo piano version highlighting the ambiguity of a canvas of pianistic and orchestral colourings that would be a major influence on Faurés successors.

French-Canadian pianist Louis Lorties latest disc for the Chandos label is a hugely welcome collection of piano works by Gabriel Fauré, ranging from the perennially popular to the relatively neglected. It gives an excellent idea not just of the span of the composers output and the journeys travelled in his musical language, but also of the evident gifts he had as a pianist himself, even though (to his teacher Saint-Saënss dismay) he chose not to pursue the path of a performer, instead opting for the more comfortable life of professor and (eventually) director at the Paris Conservatoire.

Lortie opens with his own splendidly effective arrangement of one of Faurés most popular pieces, the Pavane, op.50. This piano version demonstrates, arguably even more effectively than the piano-chorus original or the orchestral version, why this work appealed so much to the younger generation  Debussy and Ravel  that it spawned their equally famous works in the form. Another arrangement of a firm audience favourite is Percy Graingers piano transcription of the mélodie, Après un rêve, op.7 no.1: its a beautiful, spellbinding tribute from a composer of whom Fauré had exclaimed, Hes got lots of go Hes a ball of energy.

Another familiar item here is the Suite from Pelléas et Melisande, the incidental music Fauré wrote for Mrs Patrick Campbells 1898 London performances of Maeterlincks drama. Three of the movements are heard in the composers own original piano versions, and Lorties playing is gorgeously evocative of both the plays atmosphere and the contemporary zeitgeist, not least in the gently lilting Sicilienne. A fourth movement (no.2 in the conventional numbering, placed third here) is Alfred Cortots arrangement of the Spinning Song, delicate runs giving way to undercurrents of unease.

The meat of Lorties recital, however, comes in the real piano works. Two forms that were particularly close to Faurés heart were the Nocturne and the Barcarolle, which he imbued with his own subtly daring harmonies and textures to remove any hint of pre-existing templates. Here Lortie presents Nocturnes nos 4 and 6 and Barcarolles 5, 6 and 7 with matchless sensitivity. The impassioned E flat Barcarolle, op.70, and the D flat Nocturne, op.63, with its magically iridescent central section, are particularly fine under Lorties hands, demonstrating the expressive depths of Faurés music at the height of his maturity.

Arguably the real highlight here, for connoisseurs at least, is the closing collection of the nine Préludes, op.103, which were among Faurés last piano works. Their harmonic complexities are matched here by playing of real insight as well as technical skill, the latter evident particularly in the virtuosic nos 2 in C sharp minor and 5 in D minor. But it is the elusive final Prélude, an E minor Largo, that lingers longest after the disc has stopped playing, seemingly opening up onto uncharted vistas. Here, as elsewhere on this disc, Lortie achieves enviable expressive depth without resorting to extremes  model playing for this repertoire.

There are excellent, detailed notes from French music expert Roger Nichols, a short note from Lortie himself (in which he dedicates the disc to his late teacher Yvonne Hubert, herself a Fauré pupil), and admirable recorded presence for Lorties Fazioli piano. In short, this is a mightily impressive start to what promises to be an exceptionally interesting series.