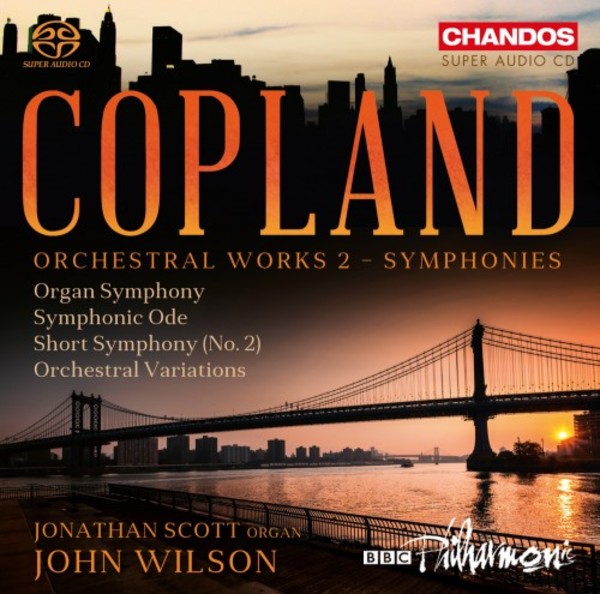 Following a highly successful recording of Coplands ballet music, John Wilson, a specialist in American music, and the BBC Philharmonic present the first volume of the composers complete symphonic output.

This unique collection of vivid and energetic pieces highlights Coplands personal, unorthodox compositional language. The mixture of works of austerity and tense excitement ranges widely, from the twenty Orchestral Variations on an original theme (originally written for piano) to the single-movement controversial Symphonic Ode, a rhythmically complex piece written in its original incarnation for a huge orchestra including eight horns and five trumpets.

The album features also the lesser-known Short Symphony (No.2) and early Symphony for Organ and Orchestra, in which the solo instrument throughout is closely integrated with the music of the orchestra.

The organ soloist is the young Jonathan Scott. Since a highly successful Gershwin concert at the Royal Albert Hall in 2014, he is increasingly acclaimed around the world for his performances of American music.

This album was recorded on SACD in the mythic Birmingham Symphony Hall.

... Wilson and the orchestra should take much of the credit for the way in which these pieces emerge so vividly. Everything about the performances signals a conductor and an orchestra who really believe in the quality of the music they are performing. The BBC Philharmonic seems to relish Coplands springy rhythms, long-limbed melodies and irrepressible invention, while Wilson manages to bring transparency and buoyancy to even the most massive climaxes. The sound is outstanding, too.  Andrew Clements
The Guardian 5 October 2016

The performances are outstanding. The Organ Symphony was recorded in the generous acoustic of the Bridgewater Hall, Manchester, with Jonathan Scott matching the orchestras incisive attacks and subtle woodwind colours successfully on the halls Marcussen instrument. The BBCs Salford studio provides a closer but well-judged perspective on the other items. ... Outstanding.  Anthony Burton (Orchestral Choice)
BBC Music Magazine November 2016

Rounding off this collection is a grippingly intense performance of the Orchestral Variations, Coplands 1957 transcription of his concentrated and astringent Piano Variations of 1930. Both the original piano version and the orchestral arrangement bear the influence of Schoenberg and neither has found much favour with performers or audiences. Nevertheless, as this performance makes clear, this powerful and imposing work is one of Coplands greatest achievements. Copland made a strong case for it in his 1968 recording but Wilsons version is even finer, and the recording is of demonstration quality. An outstanding release.  Christian Hoskins
Gramophone Awards issue 2016