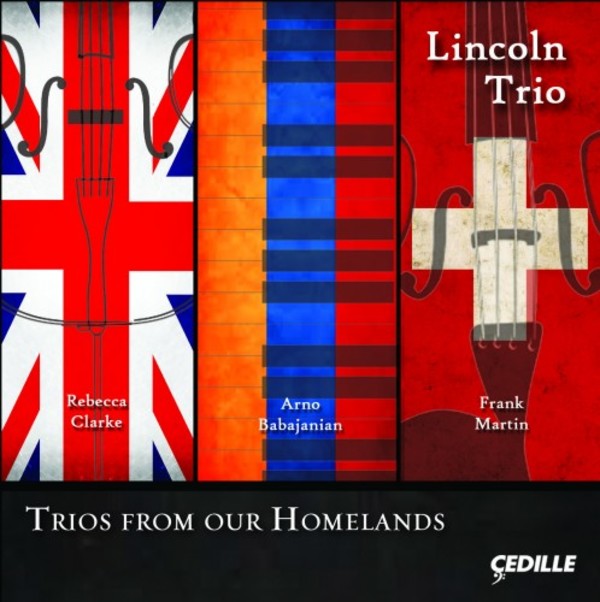 Lincoln Trio: Trios from our Homelands

Trio on Popular Irish Melodies for Piano, Violin and Violoncello

Trio on Popular Irish Melodies for Piano, Violin and Violoncello

A one-of-a-kind album, Trios From Our Homelands offers stellar performances of substantial works that many listeners will be discovering for the first time. The 1922 Piano Trio by Englands Rebecca Clarke brims with attractive melodies presented with virtuosity and musical ingenuity. Armenias Arno Babajanian, whom Mstislav Rostropovich called a brilliant composer, is represented by his passionate Piano Trio in F sharp minor from 1952. Swiss composer Frank Martin wrote his tuneful Trio on Popular Irish Melodies, the best-known work on the album, in 1925.

The Lincoln Trio made its full-length Cedille album debut with Notable Women, featuring works by Lera Auerbach, Stacy Garrop, Jennifer Higdon, Laura Elise Schwendinger, Augusta Read Thomas, and Joan Tower. Gramophone said, The performances by the Lincoln Trio are models of vibrancy and control. The notables on this recording could hardly have better champions. The Strad praised the ensembles interpretative flair and supreme clarity of expression. Cedilles Turina: Chamber Music for Strings and Piano is an album on which sensitive and polished readings by the Lincoln Trio and assisting musicians reveal what is best about this neglected repertory (Chicago Tribune). The group also performed on the Grammy-nominated Naxos recording of James Whitbourns Annelies.

The Lincoln Trio give shapely and impassioned performances of these three unfamiliar 20th-century chamber works. The Trio in F sharp minor by the Armenian-Soviet composer Arno Babajanian draws on folk styles, but the lyrical mood is close to Rachmaninov. The poetic, song-like violin solo in the slow movement is beautifully captured by violinist Desirée Ruhstrat, with warm support from David Cunliffe (cello) and Marta Aznavoorian (piano).  Fiona Maddocks
The Observer 2 October 2016