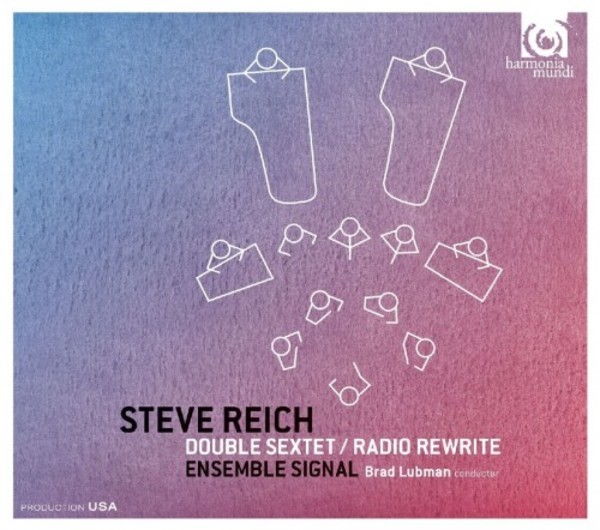 In 2011 Steve saw a performance of his classic electric guitar piece Electric Counterpoint played by Radioheads guitarist Jonny Greenwood. Reich enjoyed meeting them and was impressed and had the idea to reference some of their music in a new piece. In truth there is not much Radiohead in Radio Rewrite, just a few wisps of the harmonic motion from Everything in Its Right Place and a few scraps of tune from Jigsaw Falling into Place... After all these years, Radio Rewrite feels like his own remix, using only as much Radiohead as he needs to get his own music flowing. - David Lang in the CD booklet

Reich turns 80 in October and Signals tribute is a buoyant disc of two fairly recent pieces, both scores full of finesse and detail, both still bobbing to that definitively Reichian thrum that was once so game-changing. Six musicians play against recordings of themselves in the Double Sextet (2007) while snippets of Radiohead songs are woven through Radio Rewrite (2013)  a neat gesture from a composer whose influence on contemporary art rock is inestimable. Conductor Brad Lubman keeps the music lucid and elegant, if rather low-key; youll find peppier recordings of both works, but I enjoyed the warm sounds and lack of hysteria here.  Kate Molleson
The Guardian 12 August 2016