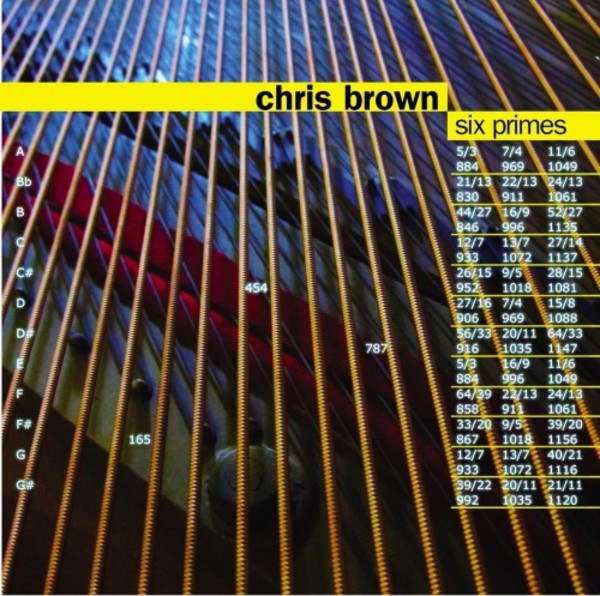 Chris Brown (b.1953) composes music for traditional instruments, acoustic instruments with interactive electronics, improvisers, and computer networks. With Six Primes (2014), for retuned piano in 13-limit just intonation  drawing on the Rhythmicana ideas of Henry Cowell, the pure keyboard focus of Conlon Nancarrow, the affection for just intonation of Lou Harrison, and the unadulterated clarity of mathematical process of James Tenney  Brown is staunchly positioned, aesthetically, as a West Coast American experimentalist.

Six Primes is composed using the first six prime numbers 2, 3, 5, 7, 11, and 13 to govern both its tuning and temporal structure, including harmony, rhythmic subdivisions, and form. I wrote this music to explore the limits of using the same integer ratios to simultaneously provide melodic, harmonic, and rhythmic materials. The piano must be retuned in just intonation using the tuning system factor of 2, three ratios with highest prime of 3, and two ratios each with highest primes of 5, 7, 11, and 13. This creates a great diversity of interval relationships: whereas 12-tone equal temperament has just twelve distinct intervals, this tuning has 75.

I employed this algorithmic control over form in part to evoke the egalitarianism of twelve-tone music, and to divert from monocentric tendencies of modal musics. Within that form, however, I allowed myself to compose freely, using a diversity of melodic, harmonic, and polyphonic ideas. Lou Harrisons endlessly branching melodies, Cowells polyrhythms and tone clusters, Cages equanimity and Stockhausens deterministic force, the complex minimalism of Morton Feldman, and the harmonious buzz of Ellen Fullman . . . all provided influence and inspiration. I discovered that playing asymmetrical rhythms in odd numbered subdivisions of a strong pulse can evoke a bebop-like swing. And although I never thought about it during the composing process, I think I hear in its mixture of styles an influence of Ives. - Chris Brown