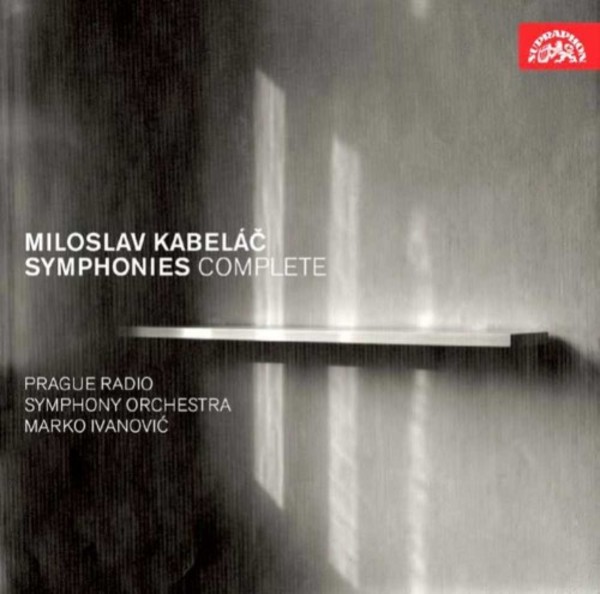 Miloslav Kabeláč completed the first of his eight symphonies in Prague in early 1942, just a few months before Bohuslav Martinů, in the USA, would plunge into his Symphony No.1, for Serge Koussevitzky and the Boston Symphony Orchestra. Kabeláč was afflicted badly by the consequences of the Nazi occupation: owing to his refusal to divorce his Jewish wife, he lost his job at the radio, his music was banned, and his life was in permanent danger. This atmosphere of gloom is duly reflected in his Symphony No.1. The euphoria following the end of World War II was very short-lived, as two and a half years later a similarly oppressive dictatorship, this time Communist, commenced. Kabeláč composed each of his symphonies for different instrumentation, repeatedly drawing inspiration from Biblical themes. Most of the pieces were premiered by the Czech Philharmonic, conducted by Karel Ančerl, an enthusiastic champion of Kabeláčs music worldwide.

The final symphony, Antiphones, was written specially for a concert at Saint Pauls Church in Strasbourg, and the superlative ensemble Les Percussions de Strasbourg, for whom Kabeláč created the famous cycle Eight Inventions, yet its premiere in June 1971 within a Hommage à Miloslav Kabeláč concert featuring his music exclusively, took place without the composers presence, as he had not received a permit to travel to the West...

Alongside Bohuslav Martinů, Miloslav Kabeláč was unquestionably the greatest Czech symphonist of the 20th century. The first complete recording of his symphonies, made by the Prague Radio Symphony Orchestra, conducted by Marko Ivanović, affords the listener the opportunity to revel in the sheer depth of Kabeláčs symphonic oeuvre. The first complete recording of Miloslav Kabeláčs symphonies. A gateway to new musical landscapes.