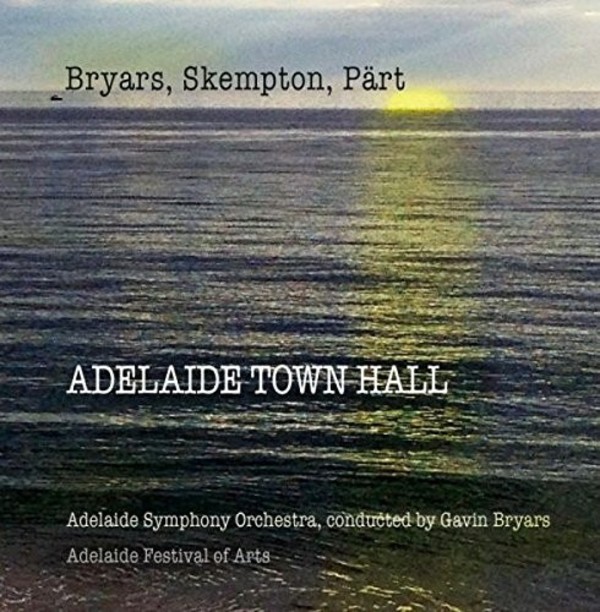 Gavin Bryars conducts the Adelaide Symphony Orchestra in works by himself, including two arias from his opera G, and by Arvo Pärt and Howard Skempton. Its the first issued recording of Gavin Bryars as orchestral conductor.

Gavin Bryars was guest composer at the 2015 Adelaide International Festival where he gave many performances including a concert which he conducted at Adelaide Town Hall. This recording presents its first half, featuring orchestral works, some almost like large-scale chamber pieces, with links to Wagner and Bach. I also included works by two friends, Howard Skempton and Arvo Pärt who, perhaps like me, have emerged in a new and different way from a relatively obscure past.

Howard Skemptons Lento (1990) was commissioned by the BBC Symphony Orchestra to precede a performance of Wagners prelude to Parsifal and uses the same instrumentation, while If Bach had been a Beekeeper (1976) by Arvo Pärt uses the well-known musical spelling of Bachs name B-A-C-H (the notes B flat-A-C-B natural) but here, rather than as an overt theme, this appears in the constant buzzing of tremolo strings. Bryars The Porazzi Fragment (1999) for 21 solo strings originates in an enigmatic, and unpublished, 13-bar musical theme by Wagner that he reportedly played on the piano the night before he died in February 1883 in Venice.

The full title of G, Bryars third opera is G, being the confession and last testament of Johannes Gensfleisch, also known as Gutenberg, Master Printer, formerly of Strasbourg and Mainz. The first act of the opera is set in Strasbourg, where Gutenberg developed his technology, and the second in Mainz, where he ultimately produced his printing. The extracts here are Ennelinas Aria in which Gs former fiancée prophesises his eventual ruin, and the Epilogue wherein a benign G, now singing from beyond the grave some 600 years after the event, muses on his achievement and asks, now that the print era he inaugurated is over, to be left in peace.