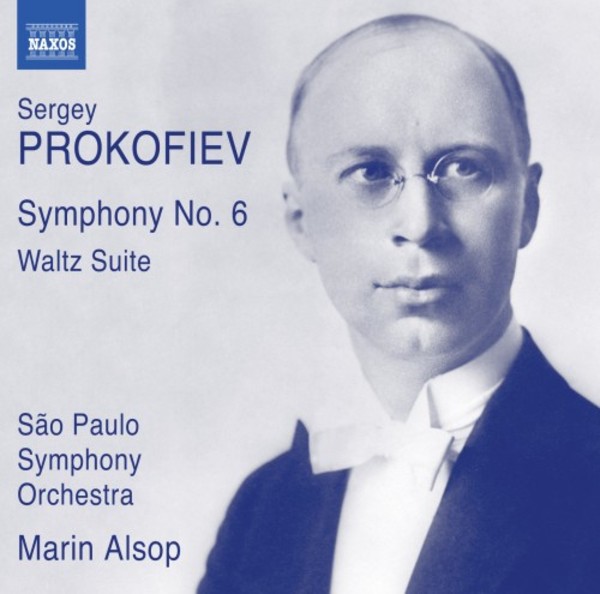 Prokofiev started work on his Sixth Symphony in 1945 and, unlike the victorious mood of the Fifth (Naxos 8573029) it reveals a darker response to war and its consequences. The work was condemned by the Zhdanov decree but composer and critics regarded the symphony highly, the noble yet anguished threnody of its central Largo balanced by the painful violence of the outer movements. The works ending has been described as one of the most shattering in the repertoire. With themes both capricious and sensuous, the Waltz Suite recycles material from earlier scores to create a remarkably effective quasi-symphonic entity.

Marin Alsop is an inspiring and powerful voice on the international music scene, a music director of vision and distinction who passionately believes that music has the power to change lives. Alsop took up the post of principal conductor of the São Paulo Symphony Orchestra in 2012 and became music director in July 2013. She continues to steer the orchestra in its artistic and creative programming, recording ventures and in its education and outreach activities. Alsop led the orchestra on a European tour in 2012, with acclaimed performances at the BBC Proms in London and at the Concertgebouw in Amsterdam. Born in New York City, Marin Alsop attended Yale University and received her masters degree from The Juilliard School. Her conducting career was launched when, in 1989, she was a prizewinner at the Leopold Stokowski International Conducting Competition and in the same year was the first woman to be awarded the Koussevitzky Conducting Prize from the Tanglewood Music Center, where she was a pupil of Leonard Bernstein.

Since it started in 2012 with an acclaimed recording of the Fifth Symphony, Marin Alsops Prokofiev cycle with the São Paulo Symphony Orchestra on Naxos has proved to be both popular with collectors and uncommonly interesting. There are several reasons for this: Alsop has raised the orchestras standards to international levels, and the recordings themselves, made in the Sala São Paulo (a fine hall in the classic shoe-box style that is actually a converted railway station), are splendid. A particular strength is the programming of the series: the symphonies have all been coupled with other, chronologically appropriate orchestral works, increasing each discs musical appeal. With the exceptions of the First and the Fifth, Prokofievs symphonies have always been less successful with wider audiences than his concertos and ballet, opera and film suites, so by widening the scope of the recordings to include music like the Scythian Suite and The Prodigal Son, this cycle gains a distinctive edge.

All these strengths are evident on the latest disc, which couples the Sixth Symphony (194547) with the contemporaneous Waltz Suite. The Sixth is often cast as the tragic sister of the victorious Fifth. In it, Prokofievs response to the end of the Great Patriotic War is conspicuously equivocal  perhaps further influenced by the ill-health that dogged the him during its composition. The first movement starts with typically sardonic gestures, but soon gives way to a more doleful mood which remains close beneath the surface even in the more forceful and energetic passages. The central Largo is a powerful but noble lament, with intriguing snatches from Wagners Parsifal Prelude, a biting central episode, and a magically-scored passage for harp and celesta, all beautifully realised here. On the surface, the Vivace finale seems the embodiment high spirits with its scurrying strings, but the brass interjections betray pain beneath the surface, and the movements later stages recall the introspectiveness of the Largo before a defiant yet ambivalent ending.

Alsops performance of the Sixth Symphony is a compelling one: level-headed and finely balanced, it refuses to wallow in the more reflective passages, instead allowing the music to speak for itself; the written-in ambivalence is thus allowed room to play with the listeners emotions. It was the predominantly equivocal mood that earned this work condemnation in the notorious Zhdanov decree of 1948, but it is also precisely this quality that makes it so fascinating for todays audiences. Happily the São Paulo players are now excellently qualified to champion this music, with their shimmering strings, weighty and biting brass, and agile woodwind. Together with Alsop they make a powerful case for the Sixths unusually absorbing music.

Prokofievs Waltz Suite is actually a compilation of passages from his opera War and Peace, the ballet Cinderella and the aborted score for the film Lermontov. At first elegant, now teasingly playful, now demonic, the six-movement sequence is more than just a substantial filler to the main work, emerging here as a surprisingly engaging work in its own right. Each movement has its own distinct character (the Mephisto Waltz from Lermontov is particularly catchy), so that there is no danger of sameness, but all are marked by that inimitable twist that Prokofiev habitually brought to the waltz genre. Best of all, it sounds as though the musicians are really enjoying themselves, always an attractive quality in a recording.

Those who have been collecting Alsops Prokofiev series will of course snap up this latest release without hesitation. For those who havent, it is an especially beguiling pairing with which to start, and well up to the high standard of previous discs. With just the Seventh Symphony left to go now, the series looks set to be one of the most satisfying and enterprising Prokofiev cycles in the catalogue.

Alsop and her players handle the great climactic moments with elan but the central threnody lacks the compassion of, for example, Sakari Oramos recording with the Finnish Radio Symphony Orchestra. The vibrant Waltz Suite, however, really swings, with some stylish solo playing in all sections of the orchestra.  Stephen Pritchard
The Observer 31 July 2016