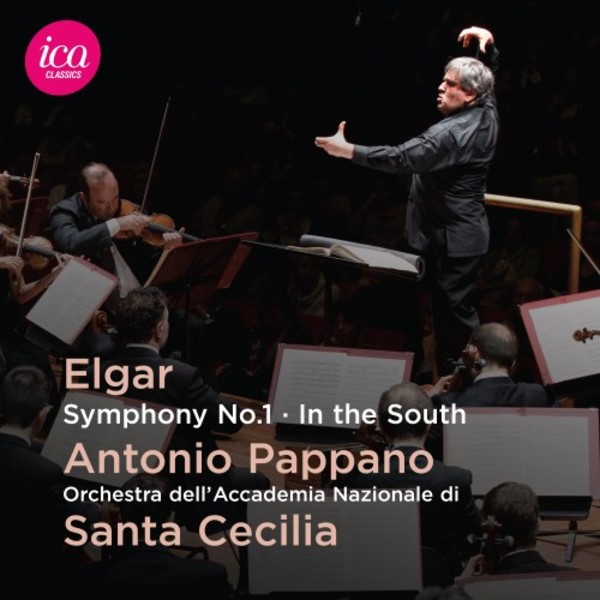 Elgar - Symphony no.1, In the South

ICA Classics is proud to present the first recording of Antonio Pappano conducting Elgar with his own Orchestra dellAccademia Nazionale di Santa Cecilia in Rome. Symphony No.1 is coupled with another Elgar work inspired by Italy, the colourful and exuberant Concert Overture In the South, a souvenir from a holiday in Alassio in 190304. Both works had not featured in the orchestras programme for 100 years. Recalling that the Symphony had been written partially in Rome, Pappano said he was on a mission to bring this music back to its place of birth and knew the players natural Italianate passion and lyricism would be ideal for the piece.

Pappanos opening London season in 2012 featured him conducting Elgar for the first time with, according to the critics, a searing account of Symphony No.1. As part of his preparation of the score, he listened to Elgars own 1930 recording.

The review in 2012 went on to say: Like many conductors from outside English tradition, Pappano has much to bring to Elgar  His surging, striving account caught all the nervous energy of this elegiac work  Now he should take the symphony, which like many Elgar works owes inspiration to Italy and was partly composed in Rome, to his own orchestra there. This has now happened!

Antonio Pappano, who studied piano and conducting, first attracted the attention of Daniel Barenboim, becoming his assistant at the Bayreuth Festival. After working in Barcelona and Frankfurt, he made his debut at Den Norske Opera in Oslo in 1987, becoming music director there in 1990. From 1992 to 2002 Pappano was music director of La Monnaie, the Belgian Royal Opera House. In 2002, he was named music director of the Royal Opera House, Covent Garden, London, his current contract there running to 2017. Pappano has also been principal guest conductor of the Israel Philharmonic Orchestra and in 2005 became music director of the Orchestra dellAccademia Nazionale di Santa Cecilia. Pappano was knighted in 2012 and was also made a Knight Grand Cross of Italys Order of Merit.

As the Elgar performances demonstrate, Pappano has created a very fine orchestra indeed, one of true international quality.  Pappano approaches Symphony No 1 and In the South as what they are  important works in the European late-Romantic tradition  and gives them tremendous energy and musical presence. His account of the symphony takes a little while to get going, but when it does, its impressive, and his treatment of the finale is arguably more successful and convincing than Daniel Barenboims on his outstanding recent recording with the Staatskapelle Berlin.  Andrew Clements (CD of the week)
The Guardian 19 August 2016