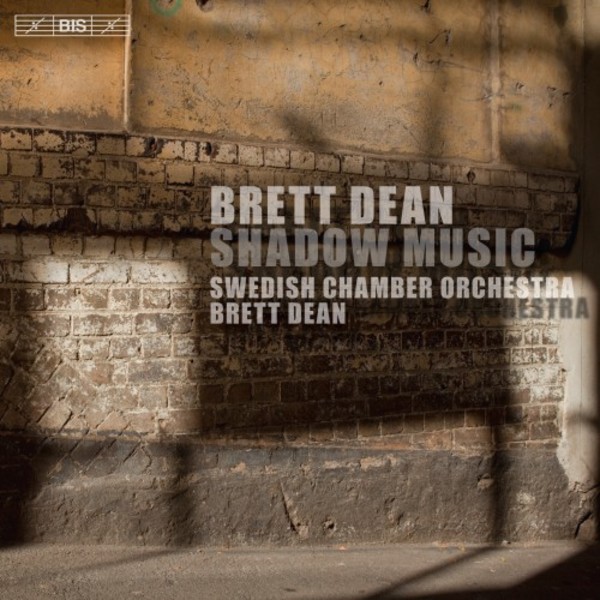 Brett Dean and the Swedish Chamber Orchestra have enjoyed a close and fruitful collaboration for many years, with Dean appearing in the orchestras concert programmes as composer as well as conductor. Now one of the most performed composers of his generation, Dean often draws on literary, political or visual stimuli in his works. Examples of this are his award-winning violin concerto The Lost Art of Letter Writing (recorded on BIS2016), inspired by four historic letters, as well as his appeal against environmental degradation, the Pastoral Symphony, which Dean conducts on a previous disc with the Swedish Chamber Orchestra (BIS1576).

On the present release, Shadow Music is, according to the composer himself, in no way consciously descriptive, but in its three movements can be heard realizations in sound of various concepts and definitions of the word shadow, such as dark shape or partial darkness, the shadow of his former self and indistinct, suspect. The work Short Stories is inspired not by specific texts, but by the literary genre which in a highly condensed form depicts the variety of life. The five brief pieces  the fourth and longest, Komarovs last words, has a duration of little over three minutes  carry titles which allow the listener to give his own imagination free rein.

Testament has a more specific inspiration  Beethovens famous Heiligenstadt Testament in which the composer bemoans his encroaching deafness. Through an imaginative use of the orchestra, including unorthodox playing techniques, Dean simulates the sound of Beethovens quill moving over the paper, but lets us also experience his aural hallucinations. The work is here preceded by Deans arrangement of the Adagio from Beethovens first Razumovsky Quartet, composed some four years after the Heiligenstadt crisis. But the disc opens with Etüdenfest, a virtuosic, ironical play with mismatched snippets from standard string methods by such figures as evčík and Schradieck. In the work, Dean turns the monotonous and lonely grind of a practising musician into a vibrant shared experience.

This superb new release in BISs series devoted to Brett Dean takes its name of the longest piece in the collection. Shadow Music is an anxious 2002 triptych with the whimpering, straining Forgotten Garden at its core, an evocation of verdure thats a shadow of its former self (Dean) and not at all happy about it.
Gramophone Awards issue 2016

Brett Dean here conducts a selection of his own works that highlights the restless imagination and sheer rightness of his string writing. Etüdenfest is a teeming showpiece drawn from the kind of finger-numbing studies every serious string student will know and dread  tongue-in-cheek, but only just. The five Short Stories exploit string possibilities to the full, as you might expect from a composer who used to play viola in the Berlin Philharmonic. These are for strings only; elsewhere we hear the rest of the excellent Swedish Chamber Orchestra too. The three movements of Shadow Music take us through different kinds of darkness, ending up in a dimly glittering, menacing fairyland.  Erica Jeal
The Guardian 19 August 2016