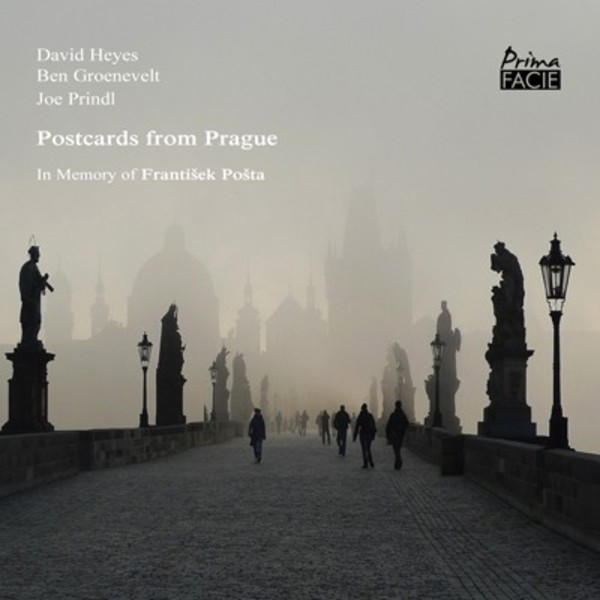 David Heyes - Postcards from Prague: In Memory of Frantisek Posta

Postcards from Prague by bassist David Heyes brings together music he composed in 2009 and 2014 in memory of the great Czech double bass virtuoso Frantiek Pota (1919-1991), who would have celebrated his 95th birthday that year.
David Heyes had the great privilege of studying with Frantiek in Prague in 1986, shortly after his retirement from the Czech Philharmonic Orchestra where he had been Principal Bass for over 40 years, and also throughout the late 1980s. Frantiek Pota was a very exacting teacher, but also an inspirational one, and his 'singing double bass' appealed to me very much, alongside his supreme musicality and beauty of sound.
David Heyes studied double bass with Laurence Gray and Bronwen Naish, later at the Royal College of Music in London, and completed his post-graduate studies in Prague with Frantiek Pota (Principal Double Bass, Czech Philharmonic Orchestra). He has given recitals and masterclasses in 13 countries over the past few years and has been a juror at a number of international competitions, twice as chairman. David has been Specialist Double Bass Tutor at Wells Cathedral School for 19 years, and is a member of Ensemble Bassissimo, Basso Bravura! (with soprano Sarah Poole), Duettino Basso (with Ben Groenevelt) and Artistic Director of Bass- Fest.
His collaborative work gained him a prestigious award from the David Walter Charitable Trust of New York for his pioneering activities as a soloist, teacher, publisher and commissioner of new music for double bass. He works with composers throughout the world and is particularly interested to expand the double bass repertoire, by commissioning new works and by rediscovering forgotten ones. Since 1990 more than 500 works have been written for him - from one to twenty basses and from beginner to virtuoso  and he has premiered nine contemporary concertos with orchestra.