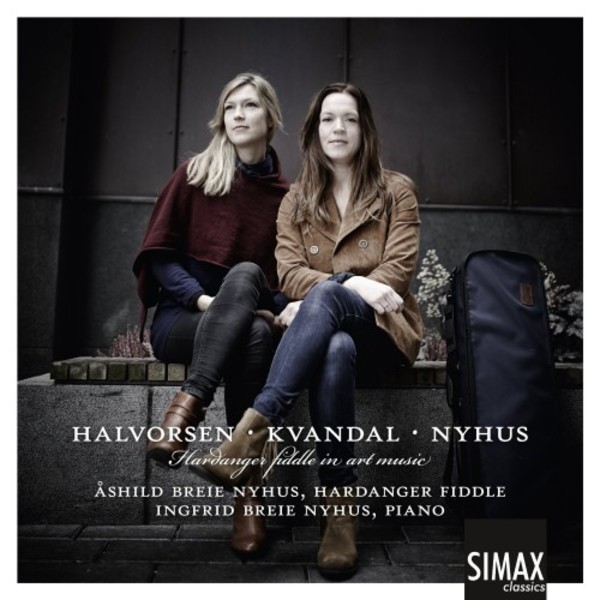 The second album by sisters Åshild and Ingfrid Breie Nyhus is deeply rooted in a wonderful meeting between Norwegian folk music and art music. The Hardanger fiddle - in all its mythical glory - is at the heart of the recording, an instrument which played a significant role in the nation-building of 19th-century Norway.

In Norway the Hardanger fiddle was not just a mere musical instrument: in the countrys folklore it functioned as a direct contact with the underworld. Halvorsens Fossegrimen is built on the myth around the fiddler Myllarguten, said to have been taught by the Grim himself, and paying for it with his soul. Drawing on her substantial experience of interpreting Norwegian folk music on the piano, Ingfrid has arranged Halvorsens famous suite for fiddle and piano.

Their father, folk musician, fiddler, composer and musicologist Sven Nyhus has often advanced the Hardanger fiddles place in the art musical world: his Three pieces for solo Hardanger fiddle was first and foremost a contribution to increase the awareness of the instrument in a concert setting. Equally important in that regard is Johan Kvandals acclaimed Quintet for Hardanger fiddle and string quartet, commissioned by the Arctic Arts Festival.

Åshild Breie Nyhus (b.1975) is a fourth generation fiddler in her family at Røros, performing as a soloist on the Hardanger fiddle with several Scandinavian symphony orchestras. Her performances of the Norwegian folk musical heritage is combined with her practice as a classical violinist and violist - in the Oslo Philharmonic Orchestra and the Norwegian Chamber Orchestra. Ingfrid Breie Nyhus (b.1978) has studied piano in Oslo, Helsinki and Hannover, won a range of awards - amongst them the Norwegian Soloists Prize in 2005 - and is now preoccupied with a further specialization of folk-inspired music.

This is the second release by the Nyhus sisters for Simax Classics, following their hugely successful album of Edvard Griegs Slåtter, op.72, recorded in the composers own living room.