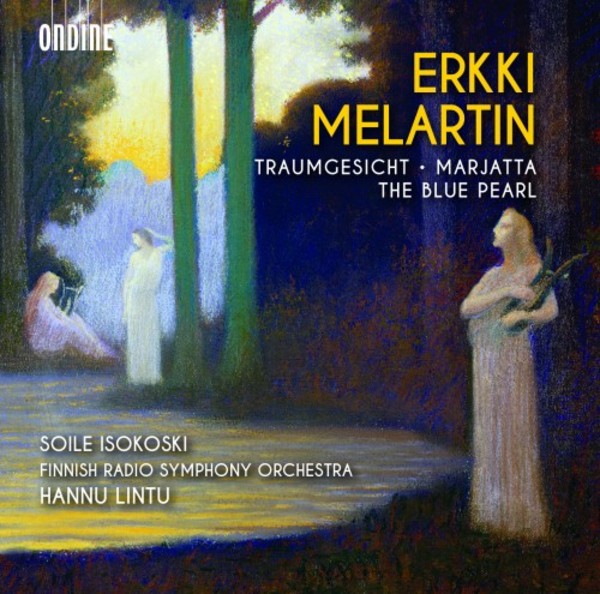 This Ondine release features world première recordings of three orchestral works by Erkki Melartin (18751937), one of the most influential Finnish composers  and symphonists  of the early 20th century. This programme is performed by the Finnish Radio Symphony Orchestra under their chief conductor, Hannu Lintu.

Traumgesicht is an Impressionistic large-scale symphonic poem written for Alexander Siloti in 1910. In later years Melartin considered it as one of his most important works. Traumgesicht differs from the National Romantic image generally associated with Melartin. It could be described as progressive: the composer was obviously up-to-date with recent trends, since influences from composers such as Richard Strauss, Debussy, Rimsky-Korsakov and Scriabin may be detected. The work lay unperformed for 81 years until Hannu Lintu brought it back to light by conducting it in Helsinki in 2013.

Music for the ballet The Blue Pearl, completed in 1930, was one of the last major works written by Melartin and, surprisingly, the first full-length ballet written in Finland. Although the ballet music was popular in its own time the work gradually fell into oblivion. Conductor Hannu Lintu has adapted the music of the ballet into a 8-movement concert suite.

Erkki Melartin was an important figure in Finnish music history, but he was only 10 years Sibeliuss junior, and until recently his music has been languishing in the shadows. Traumgesicht, the 1910 orchestral tone poem with which this disc begins, is an atmospheric, dreamy score conjuring up night-time visions, with hints of Strauss and, in places, pre-echoes of Ravels Daphnis et Chloé. ... The highlight, though, is Marjatta, a setting of part of the Finnish Kalevala myth, commissioned as a companion piece for Sibeliuss Luonnotar and here gloriously sung by soprano Soile Isokoski.  Erica Jeal
The Guardian 22 July 2016