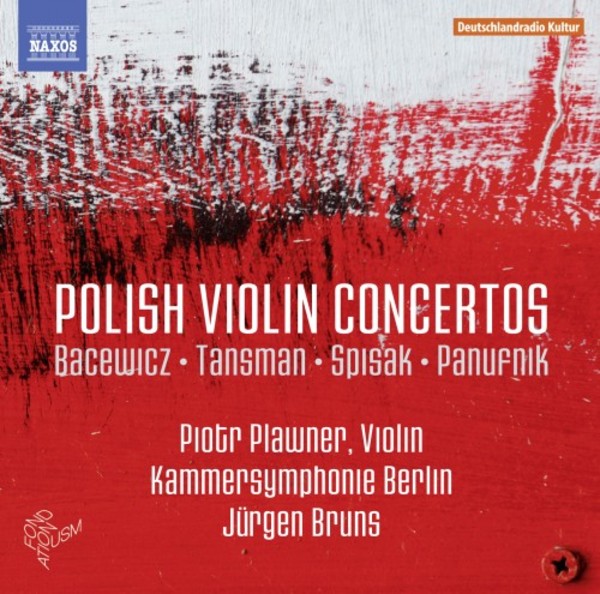 Andante and Allegro for violin and string orchestra

Pieces (5) for violin and piano (or orchestra)

Andante and Allegro for violin and string orchestra

Pieces (5) for violin and piano (or orchestra)

The works on this recording were written by four roughly contemporary Polish composers who settled and pursued their careers in different parts of the world. Grażyna Bacewiczs First Violin Concerto displays her own glittering virtuosity as a performer, while Alexandre Tansman wrote his Baroque-infused Five Pieces for the great Josef Szigeti. Michał Spisak considered his neo-classical Andante and Allegro to be a little story for violin and orchestra, while Andrzej Panufniks wide-ranging Violin Concerto became a pilgrimage into my past and is richly suffused with Polish atmosphere.

Piotr Plawner began studying the violin at the age of six. Just three years later, he made his stage début as a soloist with orchestra. He has won first prize in no fewer than five international violin competitions. The most important of these were the International Festival of Young Talents in Bayreuth (1991), the International Wieniawski Competition in Poznań (1991) and, in 1995, the prestigious International Music Competition of the ARD in Munich. Plawner has performed as a soloist all over Europe, in the Middle East and the United States, playing at many famous venues, including Copenhagen (Tivoli), Paris (Châtelet), Berlin (Schauspielhaus), Munich (Herkules Saal), Stuttgart (Liederhalle), Barcelona (Palau de la Musica Catalana), Madrid (Teatro Monumental) and Amsterdam (Concertgebouw). He has made many recordings for radio and television, for Bayerische Rundfunk, WDR SDR, SWR, ORF, DRS, TVE and Dutch television, among others.

There are four rewarding works to be discovered on this disc, although only two of them are technically concertos, and only one isnt blink-and-youll-miss-it short. Thats the Violin Concerto by Andrzej Panufnik, written in 1971 and recorded in concert in 2014 by Łódź-born violinist Piotr Pławner, the Kammersymphonie Berlin and conductor Jürgen Bruns. The second movement, with its seemingly endless lines of melody, reminds us that the concerto was written for Yehudi Menuhin and his famous nonstop vibrato. Pławner does those long lines justice here, before wrapping up the piece in a spiky, frenetic Polish dance.  Erica Jeal
The Guardian 5 August 2016