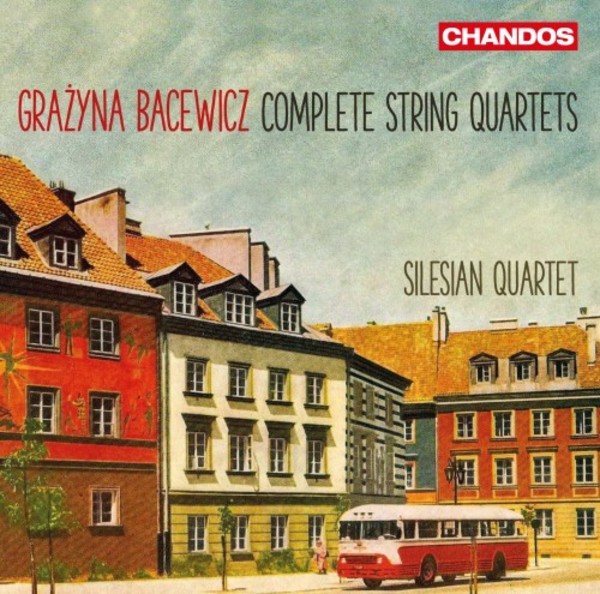 For their very first recording on Chandos, the multi-award winning Silesian Quartet presents the complete string quartets by Grażyna Bacewicz. These lesser-known chamber music treasures by the Polish composer are neatly packaged in a slimline jewel case: two discs here offered for the price of one.

The life of Bacewicz, like that of better-known colleagues such as Witold Lutosławski and Andrzej Panufnik, was conditioned by the political and military events of her time. Her works reflected not only these traumas but also the shifting stylistic currents of twentieth-century music.

Her seven string quartets, written between 1938 and 1965, are a telling barometer of these changes. The also stand as a timeline of her resolute compositional outlook and as a testament to her profound understanding of string instruments. String Quartet No.1 comes after her studies in Paris in 193235 with Nadia Boulanger (composition), André Touret, and Carl Flesch (both violin), No.2 was written in Warsaw during World War II, Nos 3, 4, and 5 date from the post-war decade, a time of socialist-realist cultural upheavals, while Nos 6 and 7 were composed during the avant-garde musical explosion that thrust Polish music onto the world stage in the late 1950s.

Unlike Naxos, and an earlier cycle from the Amar Corde Quartet on the Polish label Acte Préalable, Chandos presents the quartets in chronological order, and theres no better path into Bacewiczs sound world. Take that path, and its difficult not to be convinced that these works constitute an achievement worthy to stand alongside the quartet cycles of Tippett, Britten, Shostakovich and Bartók. ... With at least three recorded cycles, Bacewiczs quartets havent been as badly served as some and its wonderful to have the choice of two very different recent recordings. Nonetheless, the assurance, insight and finish of this particular set make it feel like a landmark  an assertion of this musics place at the heart of the 20th-century quartet repertoire, where it surely belongs. The Silesian Quartet play it like its Beethoven. Theres no point-making, just a shared commitment to letting Bacewicz speak. And thats something profoundly worth hearing.  Richard Bratby (Recording of the Month)
Gramophone August 2016

Less than a year after the Lutosławski Quartet released its recording of Grażyna Bacewiczs seven quartets on Naxos, here is a rival from the Silesian Quartet at a similar price. Which to choose? The most striking difference is speed: the Silesians knock minutes off the run times of each quartet compared to the Lutosławskis, and their default playing style is springy and fleet-footed, bringing out the idiomatic nature of Bacewiczs string writing. ...  In the end the Lutosławskis weightier reading is perhaps the more satisfying, but the Silesians version is highly persuasive too, and it is good to hear these works interpreted differently.  Erica Jeal
The Guardian 22 July 2016