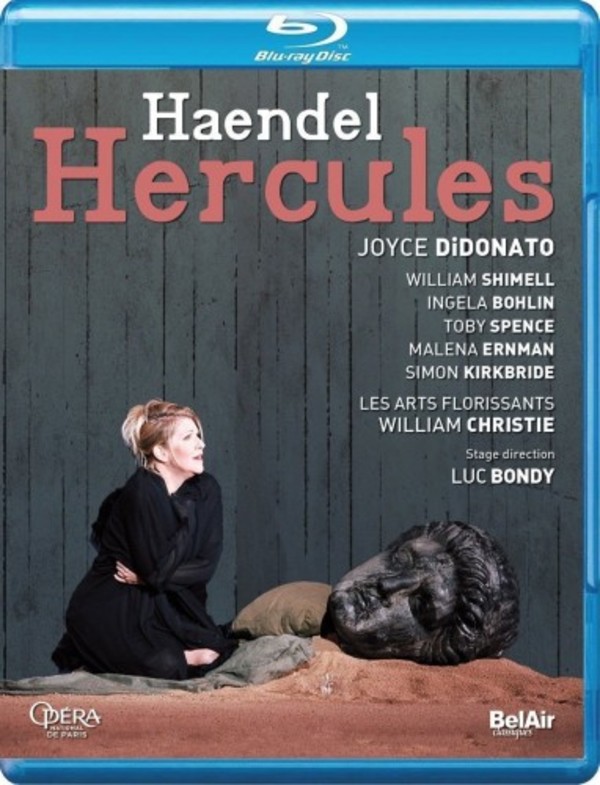 The first collaboration ever between conductor William Christie and director Luc Bondy with mezzo-soprano Joyce DiDonato, this production of Hercules has been a major event. First release in High-Definition.

Hercules returns from the war with Iole, a princess he fell in love with. Mad with jealousy, Déjanire, his wife, ends up totally insane after poisoning her husband.

Half theatrical performance, half secular oratorio, Hercules wasnt originally meant to be performed in front of an audience. Luc Bondy chose to show the dramatis personae as ordinary people, victims of their passions. The superb Chorus of the Arts Florissants, both mediator and prosecutor, is the main witness of this tragedy of womens jealousy.

The Orchestre des Arts Florissants, conducted by William Christie, is at its best with Handel, allowing Christie to support and accompany a stellar vocal cast.

With his great presence, British baritone William Shimel gives a spectacular death to his hero while American mezzo Joyce DiDonato excels as Déjanire. Gifted with a particularly rich timbre, she displays an admirable singing technique and superlative dramatic abilities. Soprano Ingela Bohlia and mezzo Malena Ernmann, both from Sweden, make marvels in the supporting roles. Last but not least, British tenor Toby Spence serves the beautiful role of Hyllus with his elegant singing.

The movie Hercules received the student prize at the Golden Prague 2005.

The Arts Florissants ensemble and William Christies assured musical leadership, and on the stage with the Arts Florissants chorus and the mezzo soprano Joyce DiDonatos tempestuous and vocally imposing portrayal of Dejanira
 David Stevens, Herald Tribune